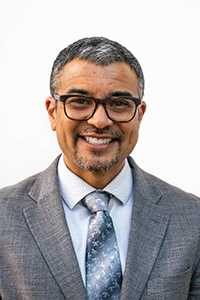 Roy Hamilton, MD, MS, was named to Cell Press’ list of 1,000 Inspiring Black Scientists in America — a list highlighting the excellence of Black people in the scientific community.

Dr. Hamilton is a neurologist and practicing clinician at PMC, an associate professor in the Departments of Neurology and Physical Medicine and Rehabilitation, and is director of both the Laboratory for Cognition and Neural Stimulation (LCNS) and the Brain Science, Translation, Innovation and Modulation Center (brainSTIM).

Dr. Hamilton also strives to advance diversity and inclusion at Penn, serving as assistant dean for cultural affairs and diversity for the Perelman School of Medicine and vice chair of diversity and Inclusion for the Department of Neurology. 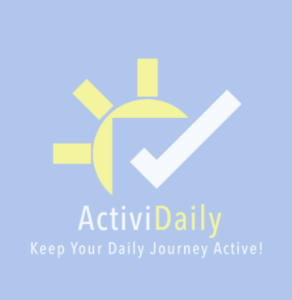 The ActiviDaily study is taking “there’s an app for that” to a new level of significance.

The app includes features for selecting individualized goals such as physical activity, cognitive stimulation, and engaging in hobbies. Alerting mechanisms are programed to help initiate behaviors to attain goals. Calendars and checklists simplify the activities in a step-by-step fashion, and rewards such as music or games are used to motivate the individual to attain their activity goals.

“The main thing we’re hoping to get out of the app is to improve quality of life for patients by getting them more involved in activities,” said Lydon.

END_OF_DOCUMENT_TOKEN_TO_BE_REPLACED 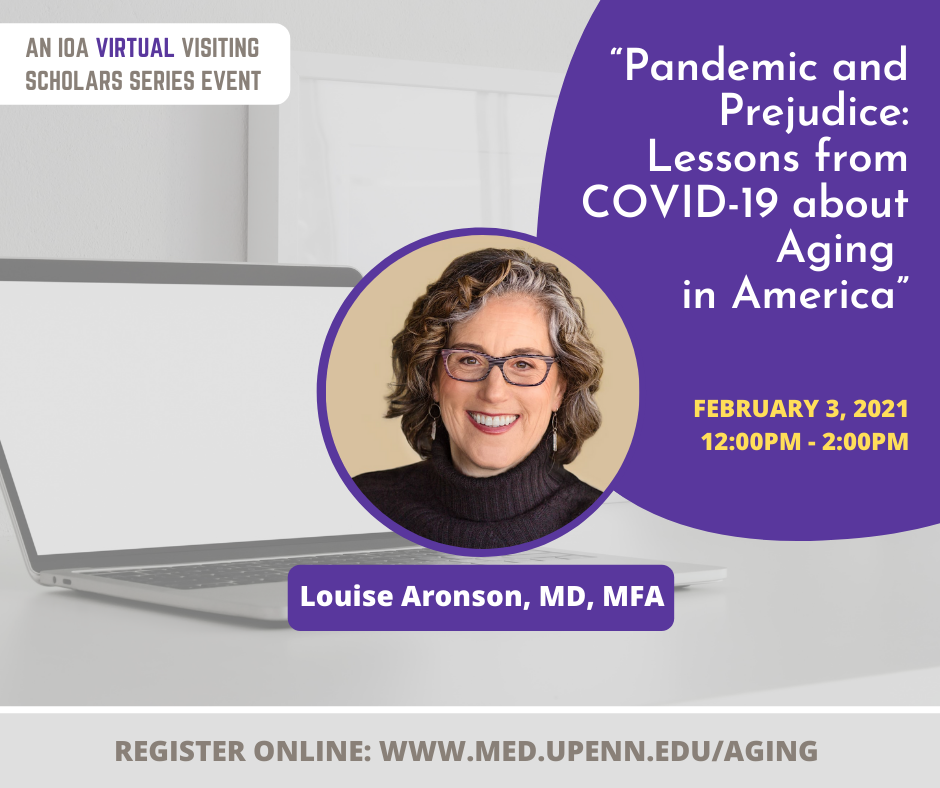 The Virtual Visiting Scholars Program hosted by the Perelman School of Medicine’s Institute on Aging is hosting a pane titled “Pandemic and Prejudice: Lessons from COVID-19 about Aging in America” with keynote speaker Louise Aronson.

Dr. Aronson is a professor of medicine at the University of California, San Fransisco Division of Geriatrics. She is a geriatrician and writer who has published books on what it means to age in our society, and the history of health and illness in San Fransisco. Additionally, she has served as the director of the Northern California Geriatrics Education Center. She has received multiple awards for her work such as the California Homecare Physician of the Year, the Gold Professorship in Humanism in Medicine, and American Geriatrics Society Clinician-Teacher of the Year.

The panel will be held on Feb. 3 at 12 p.m. Register online for a link to the virtual webinar. 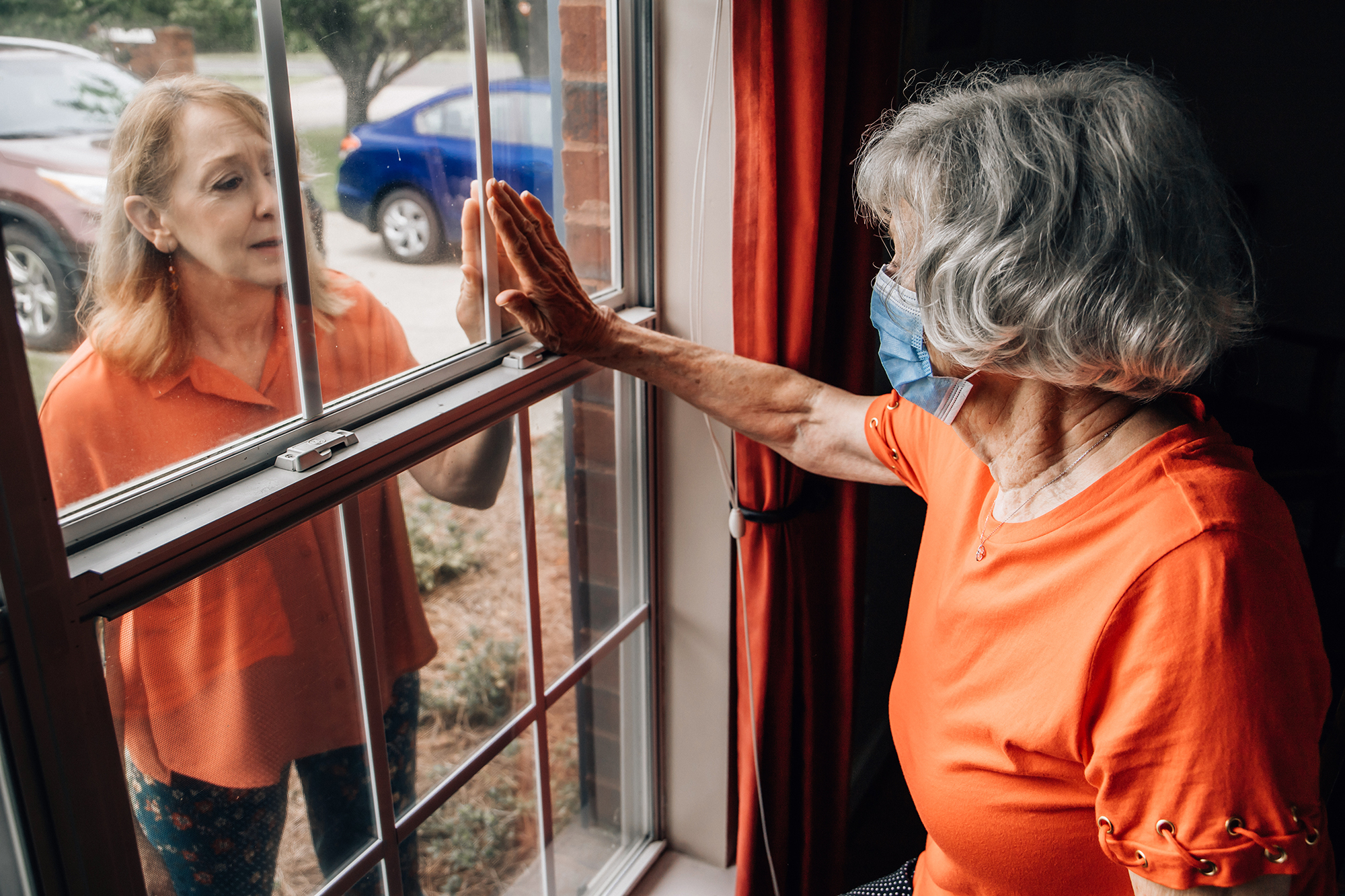 Peggy Williams has seen her husband only three times since March. Jack Williams, who was diagnosed with Alzheimer’s disease in 2013, is a resident at a long-term care facility that locked down at the very beginning of the coronavirus pandemic.

The last time they met, a plexiglass wall stood between them as they maintained a distance of six feet from one another. With Jack’s hearing problems, the masks, and the traffic from the road, Peggy had to yell to be heard.

“I didn’t even know that Jack started to gain a lot of weight and his clothes weren’t fitting him until the first time on the porch visit,” Peggy said. “Because I’d only seen him from the shoulders up on FaceTime. And Jack, of course, can’t communicate with me. His verbal skills are almost gone.”

At the end of the visit, Jack was upset. He couldn’t understand why his wife had to leave.

“They’ve kept Jack safe from COVID but, as far as emotionally and the mental toll, it’s been hell,” Peggy said. “It’s almost like he doesn’t exist anymore. The world just gets smaller and smaller, and it’s been really hard.”

END_OF_DOCUMENT_TOKEN_TO_BE_REPLACED

Two student researchers from the Penn Memory Center delivered key presentations on the measurement of gender and the effects of stigma in Alzheimer’s research at the Alzheimer’s Association International Conference – Neuroscience Next (AAIC-NN) in November.

Mehek Dedhia, a sophomore at the University of Pennsylvania studying neuroscience, and Hannah Cao, a Master of Social Work graduate student, presented at the neuroscience conference that promotes the work of early-career researchers and students in the field.

Dedhia and Cao’s presentations were produced under Shana Stites, PsyD, MA, MS, a researcher at the Penn Program on Precision Medicine for the Brain (P3MB). Dr. Stites’s research aims to understand the ways in which quality of life and psychological wellbeing can be improved for those with Alzheimer’s disease dementia. Her work focuses on how aspects of identity (such as age, gender, and race) affect the disease experience.

END_OF_DOCUMENT_TOKEN_TO_BE_REPLACED 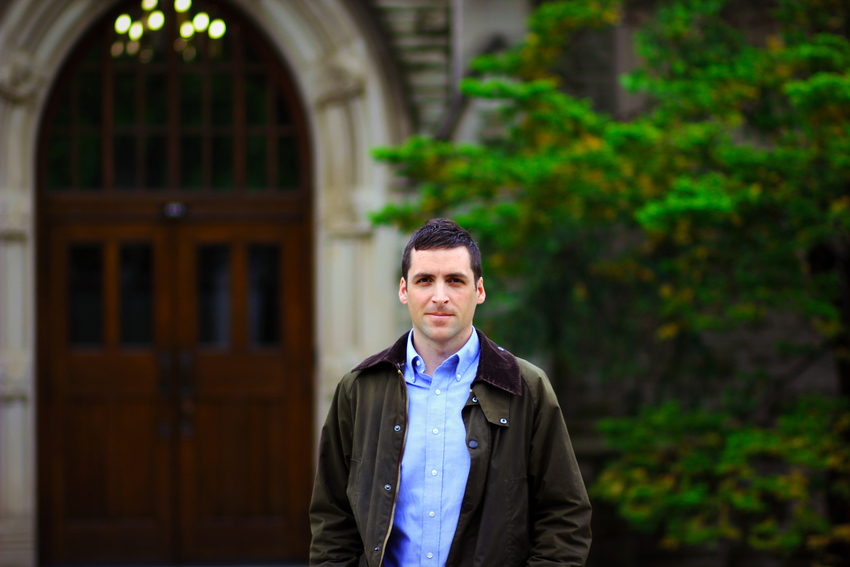 Andrew Peterson, PhD, an affiliate researcher at the Penn Program on Precision Medicine for the Brain (P3MB), was announced as one of the recipients of the State Council of Higher Education (SCHEV) 2021 Outstanding Faculty Award.

The award recognizes faculty at Virginia’s institutions of higher learning for the highest standards of teaching, scholarship and service.

END_OF_DOCUMENT_TOKEN_TO_BE_REPLACED

Why does disease progress faster in some people than in others? Why do some individuals have a higher risk of developing Alzheimer’s disease? 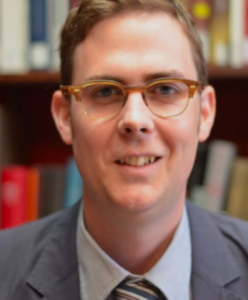 To answer questions like these, Corey McMillan, PhD, an affiliated researcher of the Penn Memory Center and associate professor of neurology at Penn’s Perelman School of Medicine, is studying the diversity of the way neurodegenerative diseases, such as Alzheimer’s disease, manifest and present themselves in people.

This diversity is referred to as heterogeneity. If researchers can better understand why, for example, one patient begins demonstrating symptoms of Alzheimer’s disease at the age of 65, but another patient begins demonstrating symptoms at the age of 85, then it may lead to more personalized treatments for individuals and improved clinical outcomes.

END_OF_DOCUMENT_TOKEN_TO_BE_REPLACED

On the Tuesday before Halloween, Glinda the Good Witch, an Italian hotelier with a penchant for wine, a princess with rainbow hair, the Wicked Witch, and an absent-minded man joined together gathered on a video call as part of the Penn Memory Center’s Cognitive Comedy program.

Participants of the program dressed in costumes or assumed different personas to engage in a weekly improv comedy class hosted by Meg Kalafsky, a program and research coordinator at PMC. 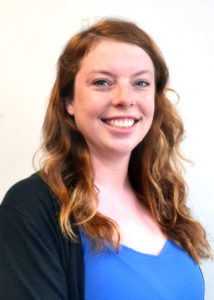 “I think that improv is helpful because it makes you think creatively. You need to quickly be able to bounce around different topics,” Kalafsky said. “I don’t think improv comedy is going to cure Alzheimer’s. But what we’re going to do is meet your progression pleasant.”

END_OF_DOCUMENT_TOKEN_TO_BE_REPLACED 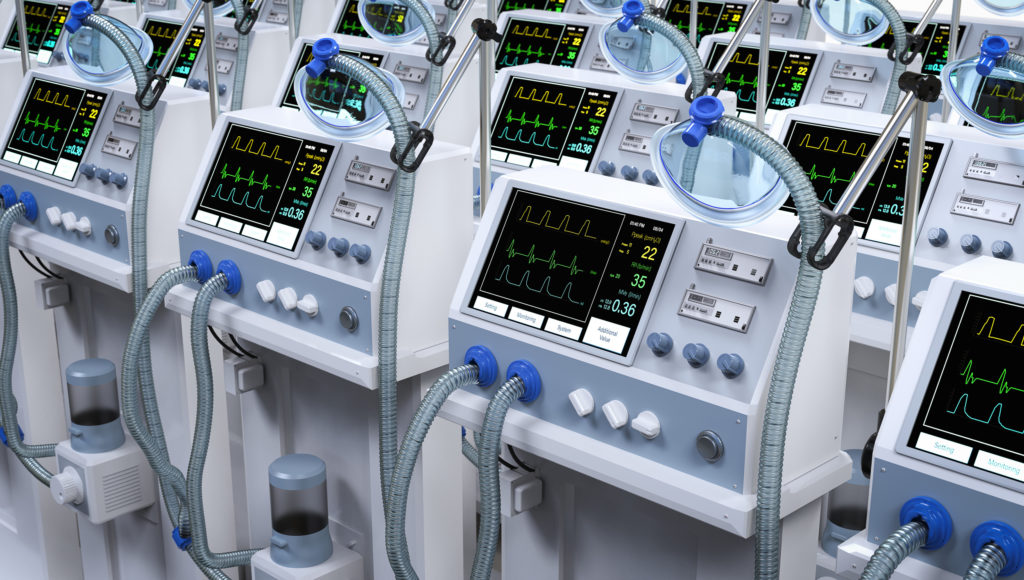 When the coronavirus pandemic began, there was great concern about the allocation of scarce healthcare resources like ventilators, ICU beds and hospital staff.

“In public health emergencies, there’s always a concern about finite resources,” said Andrew Peterson, PhD, a researcher with the Penn Program on Precision Medicine for the Brain. “How you distribute those resources to patients in need is ethically complicated.”

Dr. Peterson, an assistant professor of philosophy at George Mason University, in collaboration with colleagues at The University of Manchester, conducted a study to understand the opinions of average Americans on these allocation decisions in the pandemic. The study, titled “Public attitudes toward allocating scarce resources in the COVID-19 pandemic,” was published on Nov. 4 in scientific journal PLOS ONE.

END_OF_DOCUMENT_TOKEN_TO_BE_REPLACED 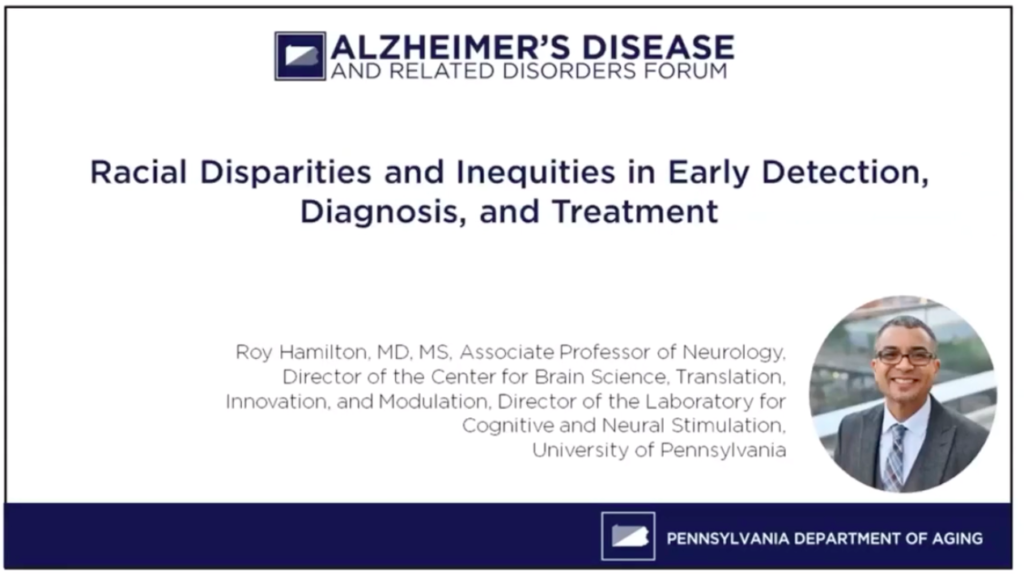 Around the time Roy Hamilton, MD, MS, was completing his neurology training, his father began developing memory-related issues. Dr. Hamilton noticed that his father was repeating himself in a conversation, forgetting important names, and having trouble with financial management and route finding.

At the 2020 Alzheimer’s Disease and Related Disorders (ADRD) Forum on Nov. 5, Dr. Hamilton spoke about his personal experience with the disease.

“Even though at the time I was training to become a neurologist, there were a lot of thoughts that went through our minds and different ways of framing what was happening to my father, that sort of got in the way of a clear-eyed view of what was actually happening,” he said. “A lot of thoughts went through our minds that may have gotten in the way of him getting the kind of care that he needed initially, even though he was the father of a neurologist and someone who is going to become a cognitive behavioral neurologist who sees patients with Alzheimer’s disease.”

Dr. Hamilton is currently  a physician researcher at the Penn Memory Center and served as the keynote speaker at the ADRD forum hosted by the Pennsylvania Department of Aging.