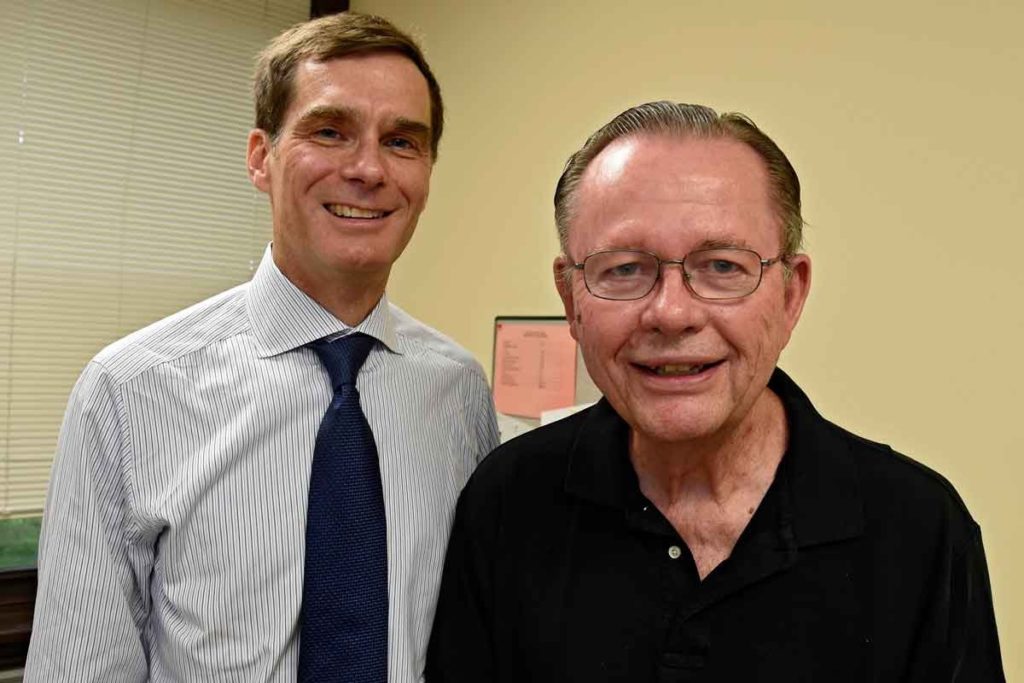 As an award-winning sportswriter for The Philadelphia Inquirer for more than 40 years, Bill Lyon has seen both the pain and the triumph of the game. Now, Mr. Lyon is fighting his own battle, living with the diagnosis of Alzheimer’s disease.

Mr. Lyon was 75 when he was diagnosed with Alzheimer’s disease at the Penn Memory Center. After writing an initial series of five columns last summer for The Inquirer, Mr. Lyon has continued to write periodically about his experience living with the disease. Mr. Lyon’s doctor, Jason Karlawish, MD, co-director of the Penn Memory Center, also wrote a column that coincided with the last installment of his five-part series.

Mr. Lyon writes in complete honesty about physical discomforts and involuntary bodily functions he experiences due to his disease, his realist view about his diagnosis, and his difficulties coping with his nemesis “Al,” the nickname he gave to Alzheimer’s disease. Mr. Lyon still somehow manages to pull humor from his situation and entice the reader to follow along on his journey.

Part I: My Alzheimer’s fight: Never, ever quit

In this first installment, published June 5, 2016, the reader travels back in time with Mr. Lyon to the doctor’s office as he is first diagnosed with Alzheimer’s disease, which he nicknames ‘Al.’ Mr. Lyon writes his innermost thoughts in this moment, and vows that his idea for the column “is to write until . . . well, until I can’t.”

In this June 16, 2016, installment, Mr. Lyon describes changes he has noticed in his behavior, both voluntary and involuntary, due to his diagnosis of Alzheimer’s. Mr. Lyon also notes the feeling of freedom in handing off his finances to his son.

June 19, 2016: Mr. Lyon outlines his Alzheimer’s diagnosis, writing about his reintroduction to a regular exercise routine and his hope that the recommended exercise and medications can curb his symptoms and “slow the spread, buy some time . . . some precious time.”

On June 26, 2016, Mr. Lyon recalls his last years of driving and the difficult decision between him and his doctor to give up the keys. Mr. Lyon also writes of his rewarding experience teaching a Creative Writing class at a community college.

Part V: My battle with Alzheimer’s: Finding my way back

On July 3, 2016, Mr. Lyon concludes his initial five-part series of columns discussing his occasional feeling of dissociation while driving and walking, and introduces his doctor, Dr. Jason Karlawish, co-director of the Penn Memory Center, who tells Mr. Lyon “it’s possible to be aware and to live well” with Alzheimer’s disease. Mr. Lyon vows to keep fighting ‘Al.’

From this July 3, 2016, side-by-side column about Bill Lyon, Dr. Jason Karlawish describes his role in Lyon’s life and diagnosis, as well as his thought process behind giving Lyon the diagnosis. He also describes why the Penn Memory Center and similar facilities are so important for those with cognitive impairment and disease.

Bill Lyon: One small toss for me, one big strike against Alzheimer’s

On August 14, 2016, Bill Lyon returns to writing his columns, saying again he vows to write until he no longer can. “A wise man once told me that if we’re lucky we’ll find before our time is up a cause that is worthy of our passion and purpose,” writes Lyon, adding “I’ve found mine.”

February 24, 2017, finds Bill Lyon struggling to accept using a cane for balance, ultimately deciding he will use it so that “Al,” what he calls Alzheimer’s disease, won’t win.

In this March 23, 2017 installment of the Bill Lyon column series, Mr. Lyon talks about downsizing from the split-level house he has lived in for 42 years in order to be safer and the difficulty of sorting through and choosing memories to bring with him. “The harsh reality of The Long Goodbye,” Lyon writes, is that “no matter how long and how fiercely you wish for it not to end, it must.”

Coming home, to the land of no steps

On April 17, 2017, Bill Lyon describes a fall he had on the steps in his home before moving that caused a bruise that never quite healed properly, as he refused to go to the hospital. Mr. Lyon contrasts this by describing the ease at which he can move about his new place, writing “there’s not a step, not a stair in the whole place, remember?”

Bill Lyon: Time to shine a light on Alzheimer’s

May 14, 2017, Bill Lyon describes shoppers and employees in a store asking if he’s ok, and the embarrassment that accompanies the fact that one day he might actually need their help. “Alzheimer’s is a disease,” Mr. Lyon writes. “It is nothing to be ashamed of. You didn’t ask for it.”

Bill Lyon: Ghostly visits and the power of hugs

In Bill Lyon’s latest ‘one in an occasional series,’ from June 5, 2017, he talks about sleeplessness and seeing ‘ghosts’ manifesting from eye floaters. Mr. Lyon continues to fight against ‘Al,’ saying “we’ll not permit him an inch of surrender. Remember our mantra: Resist. Persist. Never, ever give up.” Mr. Lyon then discusses his late-onset love for hugging.

Bill Lyon: Alzheimer’s chips away at your ability to communicate

In his October 5, 2017 column, Bill Lyon talks about how writing is becoming increasingly difficult for him, in part because of his cataracts (which was resolved with surgery) and his tremors. “Alzheimer’s robs you of your ability to communicate,” he writes, but he adds that “he is trying.” Mr. Lyon also discusses how he’s adjusted to assisted living (also known as “God’s waiting room”). “There is that old saying, misery loves company. There is misery, but you learn to adapt and adjust.”

The wisdom of my patient, Bill Lyon

Accompanying Bill Lyon’s October 5, 2017 column is one from his physician Jason Karlawish. Dr. Karlawish writes about Mr. Lyon’s crusade aimed at changing the culture around Alzheimer’s disease, to combat the stigma surrounding the disease. “Bill took a big and uncommon risk, and his sacrifice is our reward. We feel not only our sufferings, but also the sufferings of others,” Dr. Karlawish writes.

Ethel Lyon was a fighter to the end

Bill Lyon’s wife of 52 years, Ethel, passed away in March 2018, and in his column published on March 20, 2018, Mr. Lyon reflects on their life together. “My wife, Ethel Lyon, was my middle linebacker, and over our 53 years together, I came to believe that she was indestructible. She survived cancer and emphysema and 12 major surgeries. But always, she came back, and she was fighting to the end,” he writes.

Life after Ethel, and why I’ll never, ever give in to Alzheimer’s

May 4, 2018, Bill Lyon writes about life after his wife passed away in March 2018, and how, when facing challenges posed by Alzheimer’s disease, he still can imagine and “hear Ethel urging me on, on, on.” And he finds strength from the other residents of his continuing-care community. “There is frank discussion here about death. And on occasions, you get a laugh out of it…Initially, I thought this was grim. But the people I’m with now, well, they resist, persist, and don’t ever give up.”

How two Bernese mountain dogs are helping me battle Alzheimer’s

In his column published on May 30, 2018, Bill Lyon writes about two special therapy dogs, Darla and Harvey, who live in his continuing care home and provide him solace in his battle with Alzheimer’s disease. “They ease the pain and the sting of the issues with which I struggle,” he writes.

Bill Lyon is a retired Inquirer sports columnist and can be reached at lyon1964@comcast.net. Columns will be added to this page as they are published on philly.com.