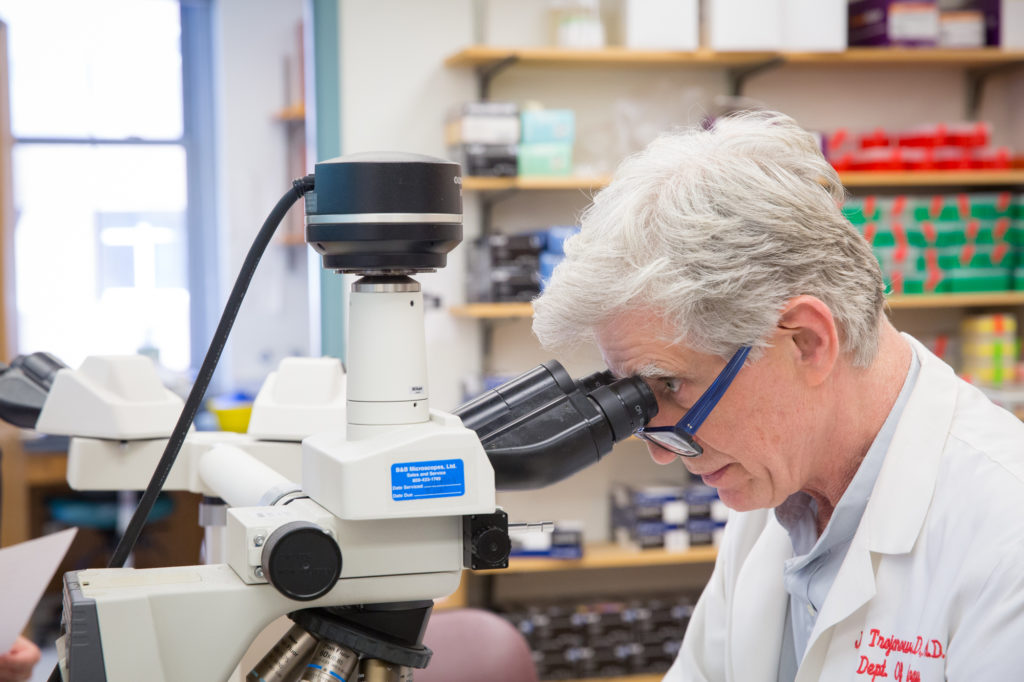 The Center for Neurodegenerative Disease Research (CNDR) at the University of Pennsylvania has received a grant expected to total $18.1 million to study the underlying genetic mechanisms that cause Alzheimer’s Disease, Dementia, and Parkinson’s Disease to progress as well as how those mechanisms are related to each other and to the cell-to-cell spread of these disease proteins.

The grant, awarded by the National Institutes of Health’s National Institute on Aging (NIA), will fund four specific projects over the next five years through the NIA Penn U19: A Center on Alpha-Synuclein Strains in Alzheimer’s Disease and Related Dementias.

The Alzheimer’s Association estimates there are 5.8 million Americans currently living with Alzheimer’s. It is the sixth leading cause of death in the United States. About 80 percent of Alzheimer’s patients also develop dementia. Both of these diseases affect language and memory, whereas Parkinson’s mainly affects motor skills. The three conditions are often associated with each other, and previous research from the CNDR and others has shown they share several underlying connections, including a connection to a protein called alpha-synuclein as well as Alzheimer’s Disease plaques and tangles. When normal alpha-synuclein proteins become misfolded and are not cleared away, they become deposits in the brain in the form of lesions known as Lewy bodies. They affect chemicals in the brain, which, in turn, can lead to problems with thinking, movement, behavior, and mood.

“Our theory is that specific misfolded shapes of these alpha-synuclein proteins can lead to specific, different diseases. For example, one pattern may be associated with Alzheimer’s, another with Alzheimer’s and dementia, another with Parkinson’s and Dementia, and so on,” said John Q. Trojanowski, MD, PhD, the William Maul Measey-Truman G. Schnabel, Jr., M.D. Professor of Geriatric Medicine and Gerontology in Pathology and Laboratory Medicine at Penn Medicine. Dr. Trojanowski is also the co-director and co-founder of the CNDR with Virginia Man-Yee Lee, PhD, MBA, the John H. Ware 3rd Endowed Professor in Alzheimer’s Research.

The grant will seek to further the team’s theory through four specific projects. The first project, led by Dr. Lee, will evaluate alpha-synuclein in test tubes and cell cultures in an effort to better understand how misfolding happens and how specific shapes are created. The second, led by Dr. Trojanowski, will mimic the first project in animal models to study the impact of these shapes on the progression of disease.

The other two projects will move the work into the clinic. Project three will use imaging and antibodies to study how a patient who begins with Parkinson’s progresses to dementia and vice-versa. This work, led by Murray Grossman, MD, EDD, a professor of Neurology, will focus on the potential identification of biomarkers. The fourth project will focus on tissue samples in an effort to identify genetic risk factors for these diseases. Alice S. Chen-Plotkin, MD, the Parker Family Associate Professor of Neurology, will lead this work.

Core leaders for the Penn projects include Dr. Trojanowski, Daniel Weintraub, MD, a professor of Psychiatry and fellow in Penn’s Institute of Aging, and Sharon Xiangwen Xie, PhD, a professor of Biostatistics and Epidemiology.