You are here: Home / News & Events / Supported Decision-Making: An alternative to guardianship for adults with cognitive impairment 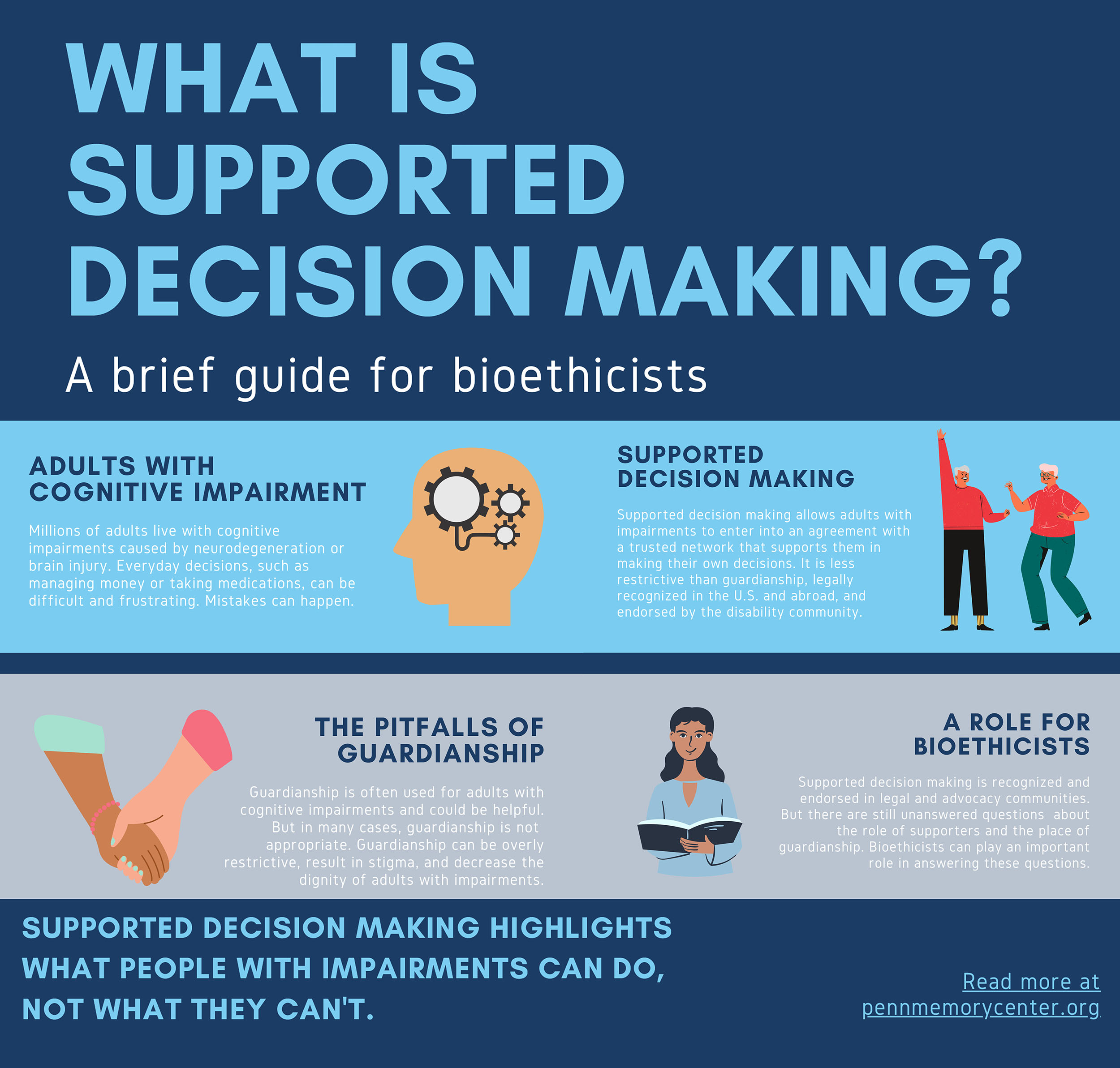 by Kamila Ahmad and Varshini Chellapilla

People living with cognitive impairment often are able to make their decisions independently. But as their condition changes, their decision-making abilities change as well.

How should people living with mild cognitive impairment or mild stage dementia, their families, and physicians navigate this typically slow and difficult transition? Is there some livable space between what seems to be two extremes — either to try one’s best or surrender and let others take over?

In a recent paper “Supported Decision Making With People at the Margins of Autonomy,” researchers at the Penn Program on Precision Medicine for the Brain (P3MB) provided a comprehensive ethical argument in support of a third way. The authors argue for a novel approach to decision making, called supported decision making.

“We felt like there was a good space for us to look at the tool of supported decision making and think about how that could be used to help people who have progressive, neurodegenerative diseases maintain their autonomy to the greatest extent possible,” said P3MB Researcher Emily Largent, PhD, JD, RN, an author of the research paper.

As a legally recognized alternative to guardianship in some states, supported decision making allows people with impaired decisional abilities to retain their decision-making independence by choosing friends and family members who help them make choices rather than make the choices for them. Supported decision making focuses on what people with cognitive problems can do—with the provision of support. This is in contrast with other legal frameworks, like guardianship, which are designed to restrict a person’s decision-making independence.

“There’s an assumption that for people who have this marginal capacity to make decisions, whether it’s because of a brain injury patient or mild cognitive impairment caused by Alzheimer’s disease, it’s an either/or,” Dr. Peterson said. “Either they can make decisions for themselves, or they can’t. But it turns out that some of these folks might be able to make decisions in some domains of their life with the support of others.”

The authors argue that supported decision making should be routine for people who have problems with their decision-making abilities but not so severe that they cannot make decision altogether.

“There are ways in which we, as trusted individuals or family members, might be able to support people with marginal capacity in certain domains of decision making,” Dr. Peterson said. “This support might be for financial decisions, medical decisions, or even daily decisions. The goal is to support people with cognitive problems so that they maintain a modicum of their autonomy.”

Supported decision making has been analyzed and discussed extensively by disability rights and labor law advocates. Much of the focus is for people with intellectual disabilities. These persons characteristically have static impairments in their decisional abilities. Moreover, from infancy and childhood onward they typically benefit from a progressive taking on of some degree of independence, often in the care of close families.

“The thing that’s new about this paper is that we are trying to think of how that framework might be brought to bear on people who have conditions that we would regard as dynamic cognitive impairments,” Dr. Peterson said.

A person who has a dynamic cognitive impairment has experienced declines in cognition and potentially faces a future of cognition changing.

“These are large and growing groups,” said Dr. Karlawish. “The wars in Iraq and Afghanistan, and the aging of our nation have collectively presented America with a vast and grown challenge of how to respect the identity and self-determination of persons who, for decades, lived as independent decisionmakers and then, over time have suffered a decline, but may get better or may get worse?”

The Centers for Disease Control and Prevention estimated that 1.5 million Americans have sustained a traumatic brain injury. The Alzheimer’s Association stated that about 15 to 20 percent of people aged 65 or older have mild cognitive impairment from any cause.

“The care of persons with MCI is particularly challenging,” he said. “They start out generally ok, but over time, mistakes start to happen. In m clinical practice, I struggled to articulate ways that my patients and their families could address this. And then I started talking to Andrew and Emily.”

The researchers argue that it is akin to offloading tasks onto the environment or using the surrounding environment to accommodate people’s disabilities.

“The general idea of supported decision making is already familiar to us,” Dr. Peterson said. “I do it with my phone all the time, right? I never remember phone numbers anymore, because I programmed into them into my phone. There are all sorts of examples of how we use the environment to offload parts of our cognition.

The paper proposes a three-step model for implementation of supported decision making in their paper — identifying the areas of life that need support, identifying the kinds of support needed or wanted, and establishing a formal agreement between the parties involved.

The researchers also acknowledged the challenges of supported decision making that focus on issues regarding the supporter’s authority or qualifications, and the transition to guardianship if necessary.

However, Dr. Peterson said that it has not been analyzed in the bioethics sphere as rigorously.

The co-authors have a combined expertise in Alzheimer’s disease and related neurological disorders, disability law and public policy, and philosophy, respectively. This lent to a wide range of insight on how supported decision making could transform health care for older adults.

“I came away from that meeting thinking, ‘Is this right? and ‘What is she talking about?’ But Dr. Silvers had planted a seed of an idea and I couldn’t stop thinking about it,” Dr. Peterson said. “A lot of the key moves in our paper are reflected in the legacy of her work. It’s nice to have this paper as way to honor Dr. Silvers and her tireless advocacy for rights of people with disabilities.”

According to the Alzheimer’s Association, more than 5.8 million Americans currently live with Alzheimer’s disease, and nearly 14 million Americans aged 65 years or older may develop the disease in the future. Supported decision making provides a space for people living with dementia and their care partners to safely navigate challenges associated with decision making and dementia. With the support of a care partner, people with dementia can continue to make decisions independently.