You are here: Home / News & Events / Shaping Copper, Making Meaning: An Art of the Mind exhibition by Carl Duzen

Framed copper artwork hangs in the hall outside the Penn Memory Center clinic. Some, like “Family Circle,” evoke memories of love and devotion. Others, like “Chalices,” awe viewers with vibrant, playful shapes, and colors, shades of copper pulled from the inside of an abandoned television or other electronics.

“Carl Duzen: Shaping Copper, Making Meaning” is the Penn Memory Center’s latest ‘Art of the Mind’ exhibition and a celebration of creativity from PMC patient Carl Duzen and his wife, Susan Jewett. Their extraordinary story, from Alzheimer’s disease diagnosis to copper art creation, was featured in 2017 on Making Sense of Alzheimer’s.

Finding beauty in what remains from Penn Memory Center on Vimeo.

At the exhibition’s grand opening in early May, Mr. Duzen’s neurologist, Dr. David Wolk, shared the story of when he first met the couple four years ago. When Dr. Wolk, now PMC Co-Director, learned of Mr. Duzen’s hobby of deconstructing old TV sets, he wondered if he should be concerned about it as a physician. But soon he found that this “work,” as Mr. Duzen called it, brought great pleasure to the retired physics teacher. 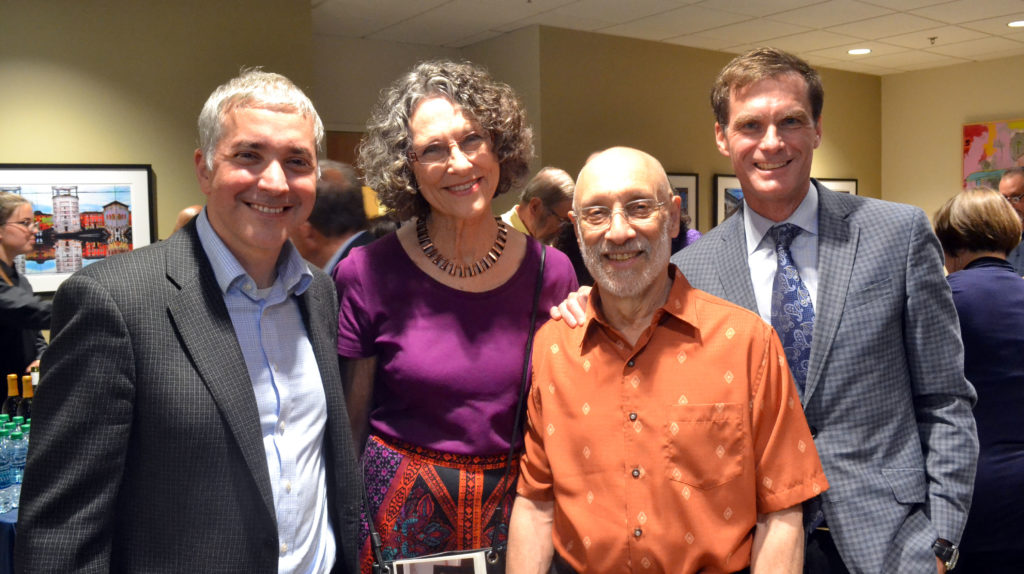 “He really had the eye to see that there was a real texture, patterns, and colors that came from the materials he was collecting, that were just really intriguing to look at,” Dr. Wolk said. “And it was the vision of his wife, Susan, who said: ‘Well, we can actually form portraits of this found art.’”

The opening of the exhibition drew a crowd of the couple’s close friends and members of the PMC community. 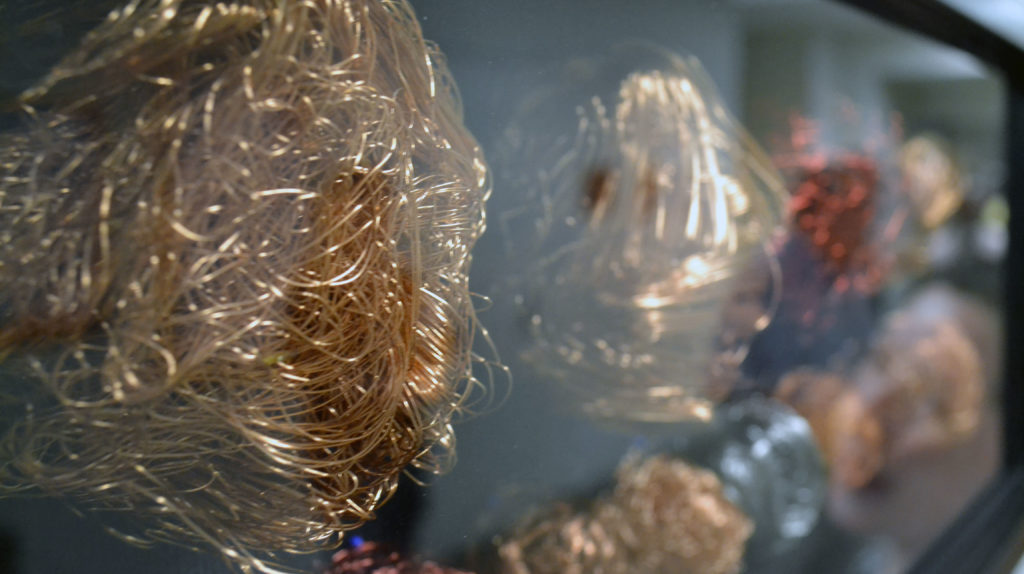 Addressing the audience with her husband by her side, Ms. Jewett said, “This is a terrible disease, as all of you know and as we’re finding out. They call it a rough road.”

“But,” she continued, “what no one ever says is that the disease leads you to meet people and institutions, to deepen friendships with neighbors and longtime friends. These are like golden moments along that road.”

The display of works draws attention not just to the diagnosis of Alzheimer’s disease, but also beyond, what living with it can be like. 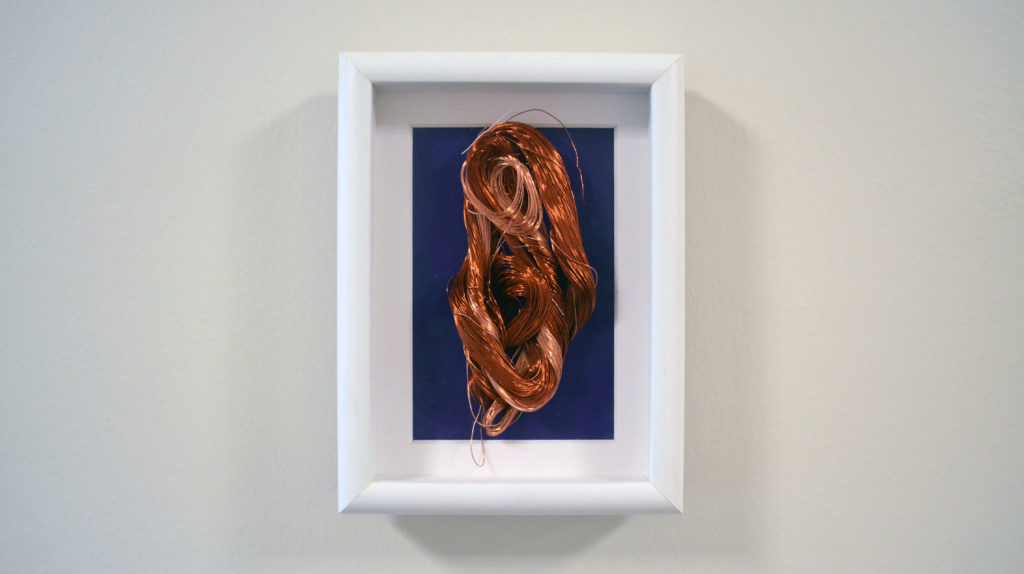 As PMC Co-Director Dr. Jason Karlawish said in his opening remarks, “Alzheimer’s disease is a brain disease, but it is a problem of the mind. And by that I mean each of us has to make sense of this most unusual disease — what it’s like to have it or to live with someone with it.”

“The way we do that is through the world around us,” he said. “That gives us the language, the stories, the images that help us interpret what’s going on to ourselves and the ones we love.” 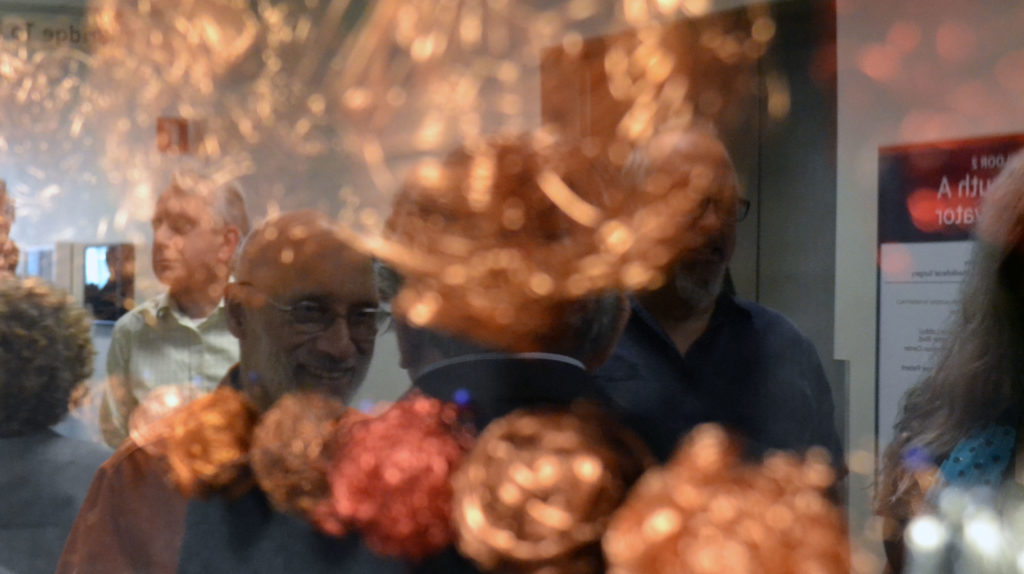 He noted that the artists’ ability to see the beauty and utility in something old and discarded may teach something to guests of the exhibition.

“In the same way that a powerful prescription can change people and make them better,” Dr. Karlawish said, he hopes that this ‘Art of the Mind’ exhibition may also be able to touch and transform those who come to see it. 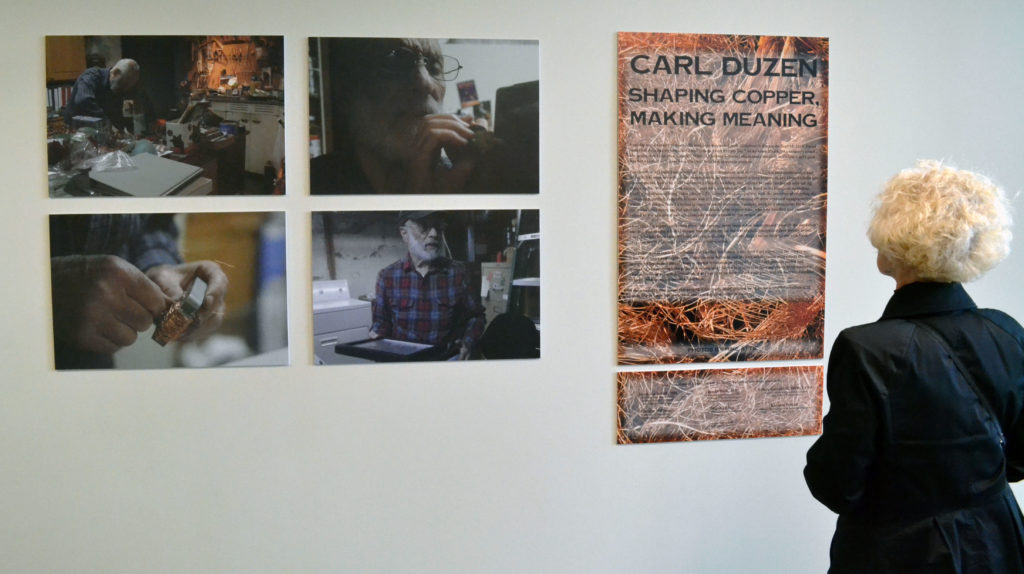 “Carl Duzen: Shaping Copper, Making Meaning” will remain in the ‘Art of the Mind’ gallery space until late October. Guests can view the exhibition during regular business hours by entering the Perelman Center for Advanced Medicine through the main doors, taking the elevator to the second floor, and following the hallway to the South Pavilion.

Mr. Duzen and Ms. Jewett are the subjects of an upcoming documentary by independent filmmaker Mike Attie in partnership with Teya Sepinuck, founder and artistic director of Theater of Witness.