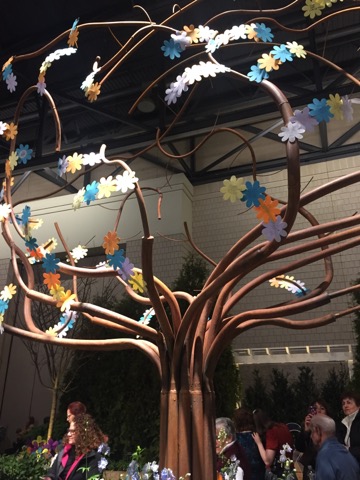 The “Promise Garden” has flower beds at a high perimeter, a circular path and no jarring shapes or colors. Its creators say it’s an ideal environment for those with memory loss.

The display at this year’s Philadelphia Flower Show was designed for those with dementia as an area where one could not wander off, get lost, or experience stress.

Promise Garden was designed by Tom Morris, Operations Manager at J Downend Landscaping, in memory of his late father-in-law, who lived with Alzheimer’s disease.

“It all came about seven years ago, when we lost him. We started participating in the Alzheimer’s Association Walk to Remember,” he said. “At that time I noticed that they hand out to participants four different color pinwheels.” 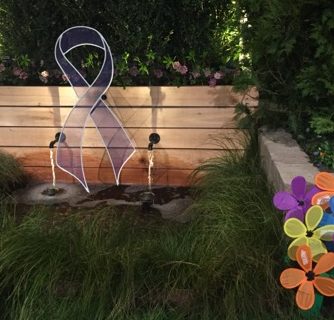 Morris gained the inspiration for his garden from these pinwheels and the Alzheimer’s Association’s own Promise Garden. The feature gave people the opportunity to promise to remember, honor, care, and fight for people with Alzheimer’s disease and their caregivers by raising their flowers. Each color flower represents a different promise:

Blue: I have Alzheimer’s disease or dementia

Yellow: I am supporting or caring for someone with Alzheimer’s disease or dementia

Purple: I have lost someone to Alzheimer’s disease or dementia

Orange: I support the cause and the Alzheimer’s Association’s vision of a world without Alzheimer’s

“I stand there every fall, and I see thousands of these things blowing in the wind, and it was my feeling that it was the power of these flowers, pinwheel flowers that are lumped together, to find a cure,” Morris said. “So that’s my play on flower power.”

“Flower Power” was this year’s theme for the Philadelphia Flower Show, the nation’s longest running horticultural event displaying floral designs and introducing landscape designers. Each year, between 50 to 60 major exhibitors participate in the show. Participants are given the theme up to 9 months in advance, and they brainstorm how they might interpret that theme.

Morris and J Downend Lanscaping’s interpretation dealt with a topic “that touches a lot of people’s lives,” said Kevin Feeley, the Communications Manager at the Pennsylvania Horticultural Society. 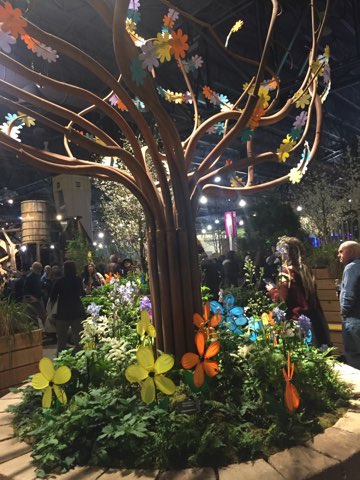 “Promise Garden” is an enclosed garden that is not walled, fenced, or caged, allowing someone living with dementia to both wander freely and still have their independence. It has a walkway designed specifically so that it starts and ends in the same location, making it easy to wander the path without getting lost. Morris also added seating in the garden, so that if visitors become tired, they can sit and relax.

“Then you have to think about the sensory experiences for a visitor to the garden,” Morris said. He described the garden as having multiple fragrant plants, mainly lilac, hyacinth, and lavender, all of which Morris said have been shown to evoke good memories in patients. There is a sound element with water running in the background. “Water is one of the strongest sounds in nature, and will tend to mute out a lot of different background noise, creating more of a calm space.”

Morris even thought about the feeling of the materials and flowers he used in the garden, describing the leaves in the garden as a “nice, soft, pillowy leaf.” All of the flowers are meant to emulate the pinwheel flowers, and includes daisies and buttercups.

In recalling some reactions that Morris has seen to his garden, he noted, “tears, smiles, happy thoughts, happy memories. I would say I’ve kinda seen and experienced almost every emotion available at this point.”

“I think overall people were really excited to see an exhibit like that. With this year’s theme of ‘Flower Power’ it really gave exhibitors a chance to interpret what flowers and plants mean to them in a variety of ways,” Feeley began. “And the exhibitor, J Downend, called about Alzheimer’s, which we know that is something that is really dear to him and his family’s heart. So they were really able to zero in on one of the powers of flowers which is to heal and to provide comfort to people.”