You are here: Home / News & Events / The Problem of Alzheimer’s: How Science, Culture and Politics Turned a Rare Disease Into a Crisis and What We Can Do About it 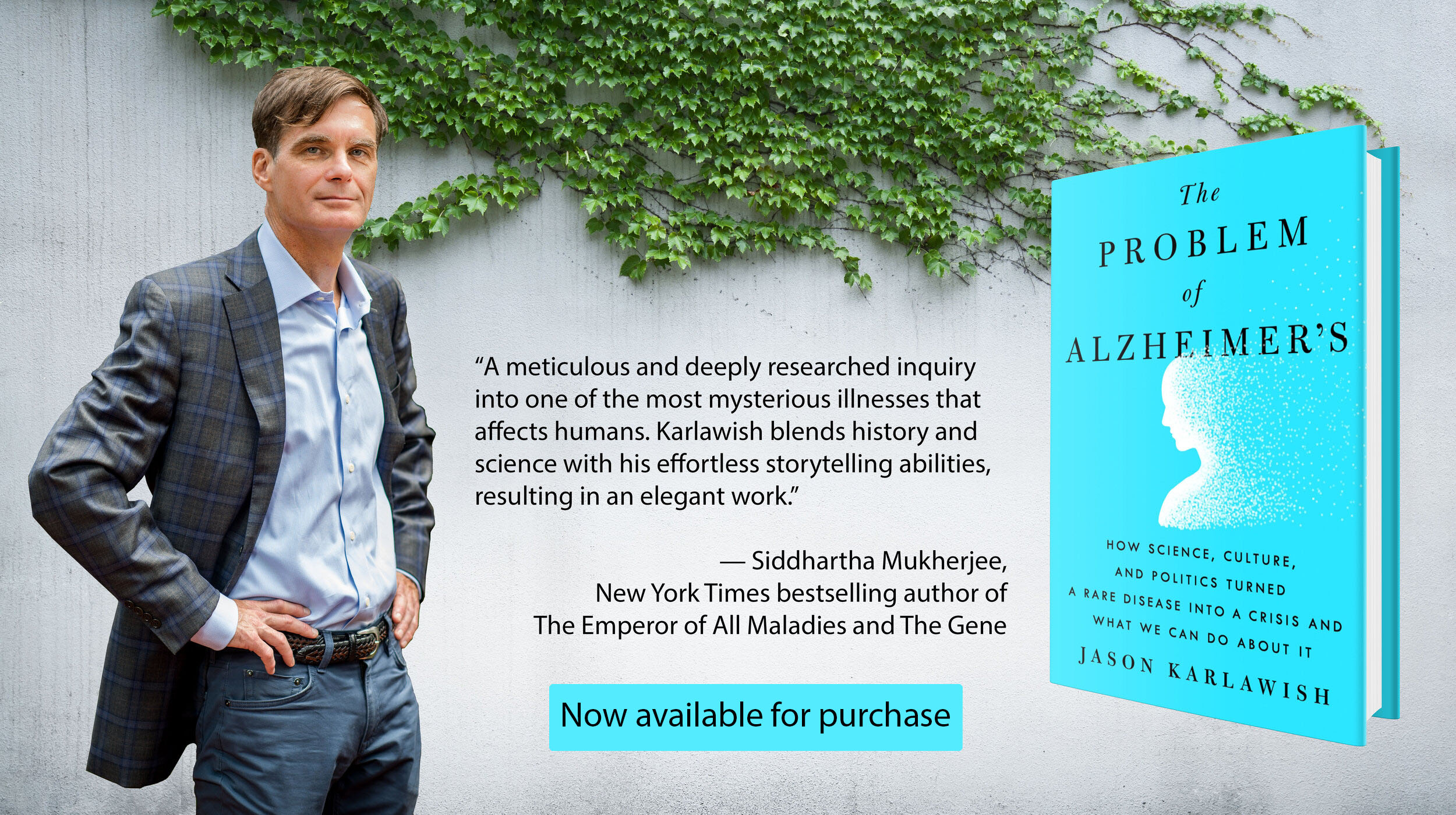 The world of Alzheimer’s disease has a complicated landscape to navigate. Neighborhoods, defined by their resident caregivers, patients, researchers, or policymakers, are constantly redefining their borders.

On Tuesday, February 23, Jason Karlawish provides a map to guide us through this world.

The Problem of Alzheimer’s: How Science, Culture and Politics Turned a Rare Disease Into a Crisis and What We Can Do About It, published by St. Martin’s Press. The Problem of Alzheimer’s looks to the disease’s past to explain its present and prepare for the future, combining Karlawish’s areas of expertise as a researcher, physician, and storyteller.

“Publication day is emotional to be sure,” he said. “I’ve been working on this book for years. In earnest, perhaps for four years, but really, for many more as I’ve been turning the ideas and stories over and over. I recently looked into my notebooks and saw I was musing on this book in 2006.”

As he has so often before in essays in outlets such as Forbes or The Philadelphia Inquirer, Karlawish draws from the experiences of his patients and their family members, amplifying stories of struggle and resilience that are both unique and all too relatable. Stories about spousal caregivers who begin new relationships or watch their loved ones enter into new relationships. Stories about families who struggle to cover caregiving duties and expenses. Stories about knowing how one wants to live and how one wants to die.

“The personal, vivid, and particular details of each story illuminate larger themes that carry across time and people,” he said. 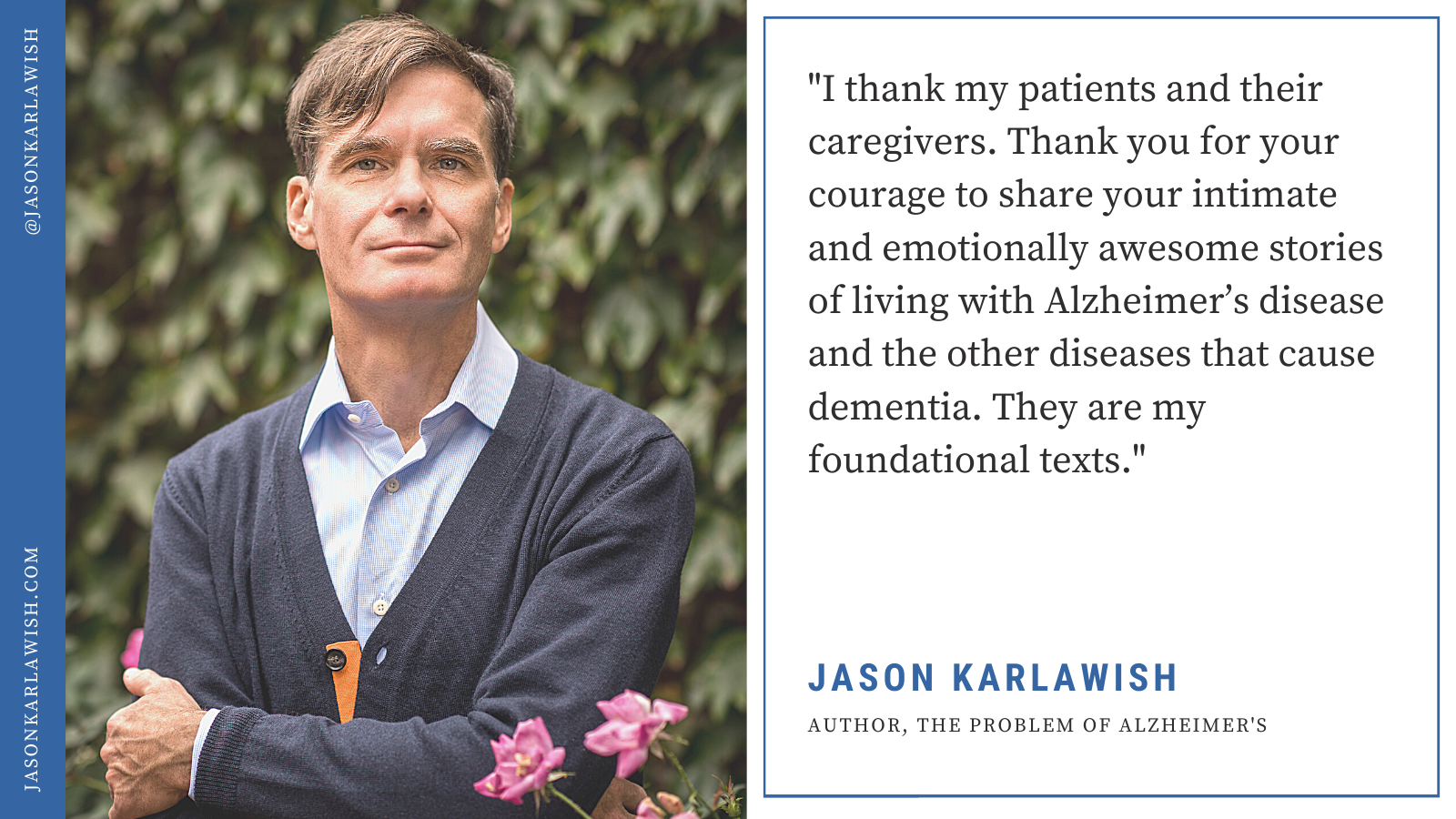 What separates this book from Karlawish’s growing collection of essays, however, is the combination of extensive archival research and dozens of interviews with leaders in the field, particularly from the Alzheimer’s Association.

“I’m so fortunate to have had access to the minutes of the early Board of Director meetings. These were as close to ‘being there’ as I could be so as to get a feeling for the organization’s early hopes and struggles.” He describes conducting multiple interviews, including with Lonnie Wollin, one of the remaining “founders” of the association, and Ryan Pridgeon, the son of Hilda Pridgeon, another of the founders.

“Talking to Ryan was really moving. His mother is an unsung hero of the Alzheimer’s field,” Karlawish said. “His plain spoken and loving stories of her really moved me. I confess at the close of the interview, we both wept. She was a force of the labor of love.”

Ron Peterson, now director of the Mayo Clinic’s Alzheimer’s Disease Research Center, reflects on a 1984 opportunity to create a “registry for dementia” that would go on to launch a new era in Alzheimer’s research.

Bill Klunk and Chet Mathis recall working to solve the issue of imaging Alzheimer’s disease in a living person using positron emission tomography. Their work has made it possible to diagnose the disease earlier and dramatically improve research to discover treatments.

Karlawish, a historian in a lab coat, also traces the history of Alzheimer’s disease research, starting with Alois Alzheimer and Auguste Deter (the first “Alzheimer’s disease” patient), analyzing the impacts of the two world wars and Nazi Germany, and examining how from Presidents Carter through Trump, national policies, and the lack of them, impacted progress in research, and the quality of care.

In the acknowledgements, Karlawish thanks his patients and caregivers.

“Thank you for your courage to share your intimate and emotionally awesome stories of living with Alzheimer’s disease and the other diseases that cause dementia. They are my foundational texts. Several years ago, Renee Packel was sharing her story with my class at Penn — I’d heard it many times before, nothing new — and yet I caught myself about to sob. I decided I need to make sense of this emotion.

“And so I wrote this book.”