In 2020, the scholars program was renamed after Christopher. M Clark, MD, who played a pivotal role establishing the PMC and acted as director for many years.

Dr. Clark was a pioneer in Alzheimer’s disease (AD) research, developing the Dementia Severity Rating Scale for dementia and mild cognitive impairment (MCI) diagnoses. His research was instrumental in developing biomarkers and therapies for AD.

“I’m so very proud of these scholars. Their commitment to improving the lives of persons living with neurodegenerative disease and their families gives me great hope,” said Jason Karlawish, MD, co-director of PMC. “Chris Clark’s legacy of nurturing and support lives in them and through them.”

After graduating from the University of Delaware, Tifani Biro, PhD, received her master’s of science in psychology from Villanova University. Dr. Biro furthered her training at Penn State, where she received her PhD in communication sciences and disorders.

LvPPA is a language disorder that can occur in patients with AD. Someone with lvPPA may have trouble finding words for what they want to say and have slowed speech.

“The studies that I’m currently working on are focused on how to repair or circumvent the area that is damaged. This way, patients can produce speech that is intelligible,” said Dr. Biro.

As a Clark Scholar, Dr. Biro will study how the process of speech adaptation, which is the link between what you hear and say, breaks down in people living with AD.

“For an individual with Alzheimer’s disease, if their language network is breaking down, that means their ability to connect with other people is also breaking down,” said Dr. Biro.

When asked about what excites her most, Dr. Biro said she’s looking forward to being involved in helping clinicians identify lvPPA and develop specific treatment targets.

As for the future, she hopes her research improves not only lvPPA treatment options, but also influences others.

“If I can inspire generations of researchers that come after me, I think that’s a good legacy to leave,” said Dr. Biro. 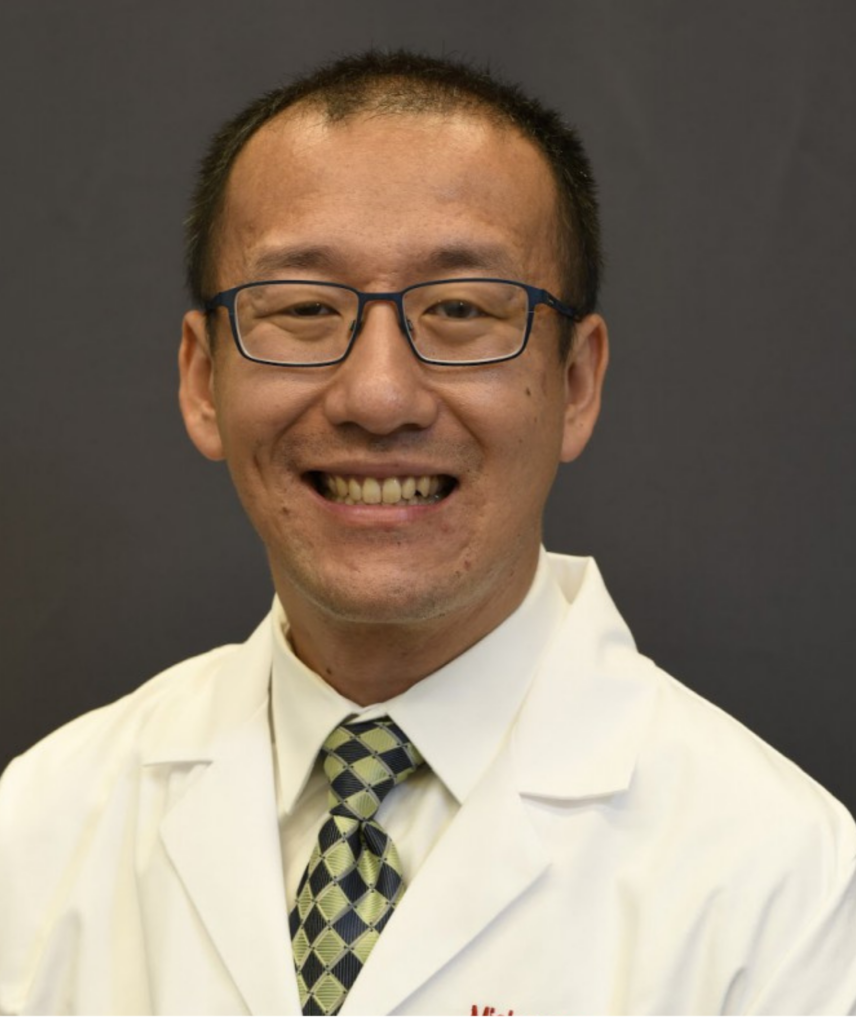 Our next Clark Scholar, Michael Guo, has a wide-spanning educational background.

While studying cellular and molecular biology, Dr. Guo received his BBA at the University of Michigan. He then completed his MD at the University of Florida College of Medicine while simultaneously receiving his PhD in Biomedical Sciences from Harvard. Dr. Guo now has two more months before completing his neurology residency at Penn.

As a Clark Scholar, Dr. Guo is excited for interdisciplinary collaboration.

“We all come from very vast backgrounds. I look forward to gaining an appreciation for all of the different perspectives at which we can tackle neurodegenerative diseases,” said Dr. Guo.

Eventually, Dr. Guo hopes to become a physician-scientist with a research focus on the underlying causes of conditions like AD.

“I envision having a focused clinic where I see patients with conditions like Alzheimer’s or frontal temporal dementia – bridging the gap between basic science and clinical work,” said Dr. Guo.

“This helps us understand which mutations may be the driving force of Alzheimer’s,” said Dr. Guo.

“I was working with Dr. Roy Hamilton and loved the experience. When I learned about the Clark Scholars Program, I decided to apply to further my knowledge about Alzheimer’s disease,” said Ekuta.

TMS is a noninvasive procedure that uses magnetic fields to stimulate the brain.

Before entering medical school, Ekuta received his bachelor’s in biology and philosophy-neuroscience-psychology from Washington University in St. Louis. He also completed post-baccalaureate work as a research fellow at the National Institutes of Health (NIH).

Ekuta is passionate about studying AD because of its intersection with health equity.

“My passion for diversity and equity stems from my upbringing. Growing up as a Nigerian-American and the eldest of five children, I attempted to find my own identity and learned to cope with my family’s frequent relocations,” said Ekuta.

Moving taught Ekuta to appreciate people of diverse backgrounds and stimulated his interest in bridging cultural and disciplinary gaps. This appreciation has guided his career.

Currently, he is an instructor for the MIT Office of Engineering Outreach Programs, which is provides free coursework for underrepresented and underserved students. Ekuta is also an Inaugural Black Men’s Brain Health Scholar.

“In this project, I am working to tease apart potential differences in biomarkers between African Americans and white individuals and helping to recruit Black men for a brain health research registry,” said Ekuta.

As a Clark Scholar, Ekuta will continue research in TMS with Dr. Hamilton.

“My goal is to build on my previous experience to investigate the effect of brain stimulation in individuals with primary progressive aphasia (PPA)” said Eukta.

“It’s a really exciting opportunity to collaborate with PMC team, who are all just incredible researchers in the field,” said Clark Scholar Emma Rhodes, PhD.

Like Ekuta, Dr. Rhodes is familiar with PMC’s training opportunities. In 2017, Dr. Rhodes joined PMC as a Summer Scholar.

“I was fortunate enough to do a clinical practicum for a year with Dawn Mechanic-Hamilton, who has been a mentor of mine for years. As a student, I was in awe of how the [PMC] functioned and loved being a part of that group,” said Dr. Rhodes.

Dr. Rhodes studied psychology at Kenyon College, completed her master’s in counseling psychology at Northwestern, and received her PhD in clinical psychology from Temple University. She completed her predoctoral training at UC San Diego School of Medicine and her postdoctoral fellowship at San Francisco VA Medical Center.

In 2021, Dr. Rhodes returned to Penn as a Clinical Neuropsychologist at the Frontotemporal Degeneration (FTD) Center.

“I really wanted to be a part of a multidisciplinary group that was doing cutting edge research in the world of neurodegenerative disease,” said Dr. Rhodes.

As a Clark Scholar, she will study behavioral difficulties and emotional difficulties, like depression and anxiety, of people living with AD and how these conditions impair cognition.

When a patient has both cognitive and behavioral symptoms, their ability to judge how they are really doing can be difficult.

“It’s really hard, even for family members, to give consistent and accurate picture of how someone is doing because they are with them every day, and that struggle seeps in,” said Dr. Rhodes.

To account for this, Dr. Rhodes hopes to develop digital technologies, such as smartwatches or home sensors, that provide accurate information about a patient in a simple, noninvasive way.

Ultimately, Dr. Rhodes is most fulfilled when she is with her patients.

“It’s just one of the best feelings in the world, to be able to work with people who are often marginalized or neglected by our healthcare system, folks who have long-term degenerative conditions,” said Dr. Rhodes.