You are here: Home / News & Events / How would you respond to your amyloid PET scan result? 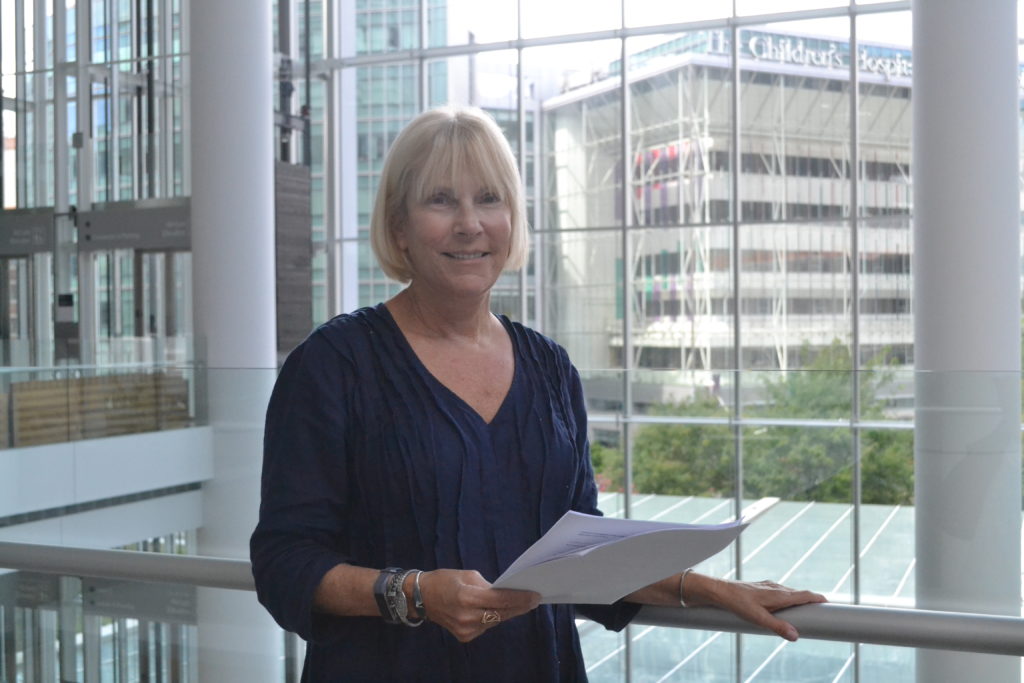 REVEAL-SCAN study participant Isabel Gurbarg stands in the atrium of the Perelman Center for Advanced Medicine. If you are 65 to 80 years old, have a parent or sibling with Alzheimer’s disease and are interested in participating in REVEAL-SCAN at the Penn Memory Center, contact study coordinator Melissa Esparza at 215-662-6093 or melissa.esparza@uphs.upenn.edu.

Isabel Gurbarg wanted to be sure.

More than a decade ago at the Penn Memory Center, then-Director Dr. Steve Arnold had diagnosed her mother with probable Alzheimer’s disease. But the only way to confirm the diagnosis would be through an autopsy procedure, Dr. Arnold told them.

And Gurbarg wanted to be sure.

“Her brain was all filled with amyloid,” Gurbarg recalled. Diagnosis: confirmed.

Amyloid: From Autopsy to Brain Imaging

In 1906, Dr. Alois Alzheimer examined the autopsied brain of a woman who had memory impairments before she died and identified sticky clumps and tangled masses in her brain under a microscope. This disease became later known as Alzheimer’s disease, and for nearly a century, the only definitive way one could diagnose this disease was exactly what Dr. Alzheimer did: examining the brain after death to find traces of the sticky clumps (called amyloid plaques) and tangled masses (called neurofibrillary tangles).

But this changed in 2004, when University of Pittsburgh researchers published the first human studies on Pittsburgh Compound B (PiB), a special compound that, when injected into the body, can bind to amyloid plaques in the brain and send a radioactive signal to be picked up by a Positron Emission Tomography (PET) scanner. This type of scan became known as an amyloid PET scan, and with it, amyloid plaques became detectable in the brains of living people.

Since then, multiple amyloid PET tracers have been approved by the Food and Drug Administration (FDA) to be used in the context of Alzheimer’s disease. Several studies, including research at PMC, currently examine the utility of these amyloid PET scans in identifying and treating Alzheimer’s disease earlier than current methods. Specifically, the Anti-Amyloid Treatment in Asymptomatic Alzheimer’s (A4) study at PMC uses and discloses the results of these scans in their investigations.

However, many questions await researchers with conducting and disclosing results of amyloid PET scans. Specifically, researchers wonder how people without memory problems might react when given information about whether they have elevated levels of amyloid in their brain.

Consider Ms. X, a woman in her early 60s leading a relatively healthy life. Sometimes she might forget where she put her keys, but she can retrace her steps to find them. Her lapses in memory occur fairly rarely and don’t interfere with her everyday life. However, one of her parents died of Alzheimer’s disease, and she is joining research efforts for the disease. As part of this study, she agrees to undergo an amyloid PET scan. A few weeks later, she comes back. The doctor tells her she has “elevated” levels of amyloid in her brain, explaining this means she is at high risk of later developing Alzheimer’s disease. How might her life change?

PMC Co-Director Dr. Jason Karlawish wrote about a real-life example of this in an October Hastings Center Report submission. “Angela” learned about her elevated amyloid while participating in an Alzheimer’s disease prevention trial. When she shared this result with her coworkers and family members, they began to treat her differently. “Must be the amyloid at work,” one coworker said once when she slipped up at work. Meanwhile, her son encouraged her to move in “before it’s too late.”

These life changes are what PMC researchers are studying in “Risk Evaluation and Education for Alzheimer’s Disease – the Study of Communicating Amyloid Neuroimaging” (REVEAL-SCAN). Dr. Karlawish is co-Principal Investigator for this study, which is conducted at four sites across the U.S.: University of Pennsylvania, University of Michigan, Brigham and Women’s Hospital (Harvard University), and Duke University.

What is Your Risk of Developing Alzheimer’s Disease?

In REVEAL-SCAN, participants (who do not have memory impairments and do have a parent or sibling who had been diagnosed with Alzheimer’s disease) learn two pieces of information about their risk of developing Alzheimer’s disease:

The estimated risk is based on age, race, gender, and family history, as risk can vary based on these factors. For example, older African-Americans are twice as likely to develop Alzheimer’s disease as older non-Latino white Americans. 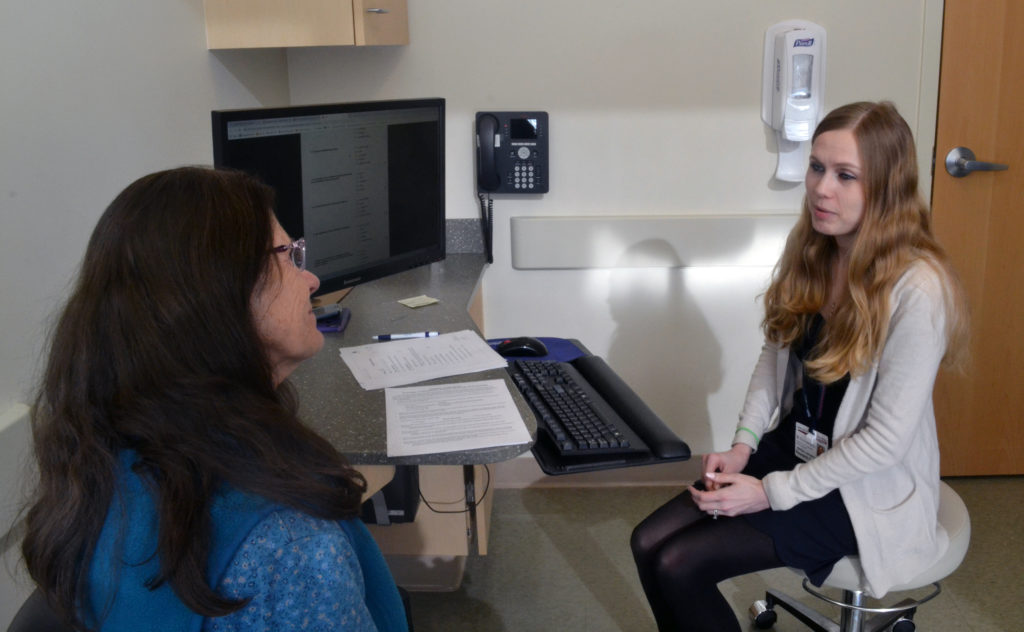 Participants are randomly assigned to learn both their amyloid PET scan result and risk estimate right after their PET scan, or just their risk estimate. They are followed for a few months to see how they interpret and adapt to the information they receive. At the very end, the people who did not already learn their amyloid PET scan result come in to receive this result.

Among the things this study looks at is how frequently and severely participants’ memory problems have been since receiving this information, who they’ve shared this information with, changes to their daily habits (such as diet and exercise), and impact on their life planning, such as employment, living situation, and legal and financial planning.

REVEAL-SCAN is contributing to one of the most important goals in Alzheimer’s disease research: to find ways to diagnose Alzheimer’s disease earlier. The information the study is obtaining on risk evaluation and education is unique and unprecedented. It will help inform the practice of diagnosing people with “preclinical” Alzheimer’s disease — those at high risk of developing Alzheimer’s disease dementia based on biomarkers — to better slow or prevent further progression of cognitive decline.

Being a Participant — and Partner — in Research

Walter Wujcik found out about the REVEAL-SCAN study from a flyer at the Perelman Center for Advanced Medicine, where he had participated in other Penn Medicine studies. He’d been fascinated because of his own family history of the disease and his “concerns about it,” from what he reads in the papers. “I’m very much interested in this.”

Similarly, Barbara DuPont was contacted after signing up to learn more about research opportunities through the PMC Brain Health Research Registry. “Because I have done my own research, I realized how amyloid plaque growth [may be] linked in Alzheimer’s disease,” she said. “I was curious about that in my own situation.”

Both Wujcik and DuPont receive information about their risk of developing Alzheimer’s disease and about their amyloid PET scan result in this study. In fact, Wujcik said that being able to receive results of his amyloid PET scan was the highlight and “the most interesting” part of the study.

Similarly, DuPont noted, “I think the information would be very valuable to me.” DuPont is still in the middle of completing the study. She added that she thinks it is “valuable for all people to know the risk of all ailments…to better plan for their own health and their family’s interactions with them.”

The more people to participate in research, “the better the health industry will be,” she said.

Gurbarg also reflected positively about her experience participating in REVEAL-SCAN, but she tells potential participants to consider the necessary time commitment. Participants are required to come in six to seven times over a nine-month period for a few hours each visit, but Gurbarg believes the time spent is worth it to benefit future generations.

“I do the study, really, for the future,” she said. “Because I have a family history of dementia, I thought I’d be a good candidate right now, while I’m still cognitively able to do the study.”

Gurbarg is a 10-year veteran of PMC studies. She also participates in the largest study at PMC, called the Aging Brain Cohort (ABC), which collects data from aging individuals over time. It doesn’t escape Gurbarg that research from studies like these might one day be able to help those like her mother.

“I’d like to be the forefront of an eventual cure [for the disease],” he said. “That I contributed something and I’ll still be alive to see if a cure develops — that would make me very happy.”

Participants like Gurbarg, Wujcik, and DuPont, who have given their time freely to research, are integral to furthering our understanding of preclinical Alzheimer’s disease. Their dedicated participation in REVEAL-SCAN means production of quality data for researchers to map, analyze, and apply to how Alzheimer’s disease risk information is communicated and disclosed in the clinic, specifically the results of an amyloid PET scan.

Identifying people who are at high risk of developing Alzheimer’s disease based on their biomarkers and treating them with drugs to stop or slow the progression of the disease is one current aim of Alzheimer’s disease research, and studies like REVEAL-SCAN will continue to shape how the field moves into this new paradigm of diagnosis, treatment, and prevention.

If you would like to learn more about REVEAL-SCAN, click here. If you are 65 to 80 years old, have a parent or sibling with Alzheimer’s disease and are interested in participating in REVEAL-SCAN at the Penn Memory Center, contact study coordinator Melissa Esparza at 215-662-6093 or melissa.esparza@uphs.upenn.edu.