You are here: Home / News & Events / Companionship that Spans Generations and Reduces Isolation for Seniors

Every Monday, Milla, a patient at the Penn Memory Center, sits at a laptop in her home, virtually “hanging out” with Emily, a student at Temple University. Despite having memory issues from dementia, she remembers her buddy from week to week. Emily often brings her dog to the virtual visits and Milla enjoys saying hello. 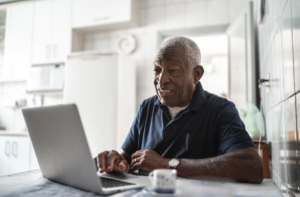 “I’m at the house working but I can hear them laughing and talking,” said Milla’s niece. “It makes me feel good that she has this good time for an hour every week. They really connected.”

Welcome to Weekly Smiles, a partnership between Penn Memory Center and Temple University that is virtually helping to fill a social interaction need for the elderly that COVID has intensified.

Like many of today’s virtual support programs, Weekly Smiles evolved from an in-person program, Time Out, a program coordinated in partnership by Penn Memory Center and the Intergenerational Center at Temple University. The Intergenerational Center, part of the Temple University College of Education and Human Development, created Time Out in 1986 to connect college students with older adults in their homes, providing up to 10 hours of companionship and engagement each week, while giving caregivers a well-deserved break. Time Out, which received a grant from the Pew Charitable Trust, was very well received and “always generated positive feedback from the families,” said Felicia Greenfield, LCSW, executive director of the Penn Memory Center.

When COVID came and made social distancing necessary for safety, students could no longer visit patient’s homes, which brought the program to a halt.  But it didn’t end the collaboration. Instead, Megan Kalafsky, program and research coordinator at PMC and JT Kendall, program coordinator at the Intergenerational Center, with the help of an Advisory Council of students and caregivers, quickly turned it into something new… and safe.  Within a month of stopping the in-home Time Out program, Weekly Smiles — an offshoot of Time Out — was up and running.  Volunteers in the Time Out program includes students from Penn, Temple and other schools in the Greater Philadelphia area.

The virtual sessions help both young and old. “Isolation has exacerbated the cognitive deficits that many of the older adults have — the change of routine and lack of stimulation,” Kalafsky said. “And it’s important for students as well. They’re also feeling isolated. They don’t have the social opportunities that they did to meet new people, from different backgrounds.” Weekly Smiles provides that, but with another generation.  To make the connection easy, virtual meetings can be done via phone or computer; it’s not dependent on access to a particular technology.

The program tries to match those who have similar interests. For example, one older participant and student both enjoy musicals and sing Broadway tunes on their chats. Another participant who speaks several languages enjoys his Spanish lessons with a student who is a native speaker. “He’s doing something meaningful and she gets to share. We look for that overlap,” Kalafsky said.

As of the end of January, 29 matches had been put in place, with 350 connections/sessions and 320 hours of connection. One is Penn nursing student Anna Jacoby.  As a history buff, Jacoby loves learning about life in the ‘50s from Millie — popular TV shows, movies and performers. Sometimes Jacoby sends video links after they talk that touch on their conversations, such as a clip of Frank Sinatra singing. “I learn so much from talking with her,” Jacoby said. “It’s like talking with a friend over coffee.”

Early onset dementia took away PMC patient Michael’s passion for music but Penn medical student Nick has brought it back. During their chats, Michael tells Nick stories about how he attended concerts and collected thousands of musician autographs on his record albums. Nick created a guessing game, playing snippets of a song that he thinks Michael would like and asks him to guess who it is. “Even if he doesn’t know, he listens closely,” his wife said. “Michael is excited and engaged in it for 45 minutes.

“He doesn’t have friends he can talk with now — most were from work or collecting music,” she said. “Now he does.”

Temple graduate student Leslie Lam spends her Thursday evenings doing virtual visits with Vinod. “He’s told me about his career as a ship’s captain and the many places he traveled and I’ve told him about my background and education.”

Learning goes both ways in these sessions. Vinod’s taught Lam to play chess and checkers, and they discovered a shared love of cooking. Once they even did a virtual cooking session together.  “He taught me to make halwa,” a traditional Indian dessert, she said.  “They set up the camera by the stove and he walked me through the recipe.” Lam, who is Vietnamese, plans to share a recipe from her own culture with him as well.

Vinod’s wife told Lam that, since the sessions began, his mood has been happier. For Lam, “it’s a break from everything.  With school and work, my mind is racing.  He helps me de-stress.”

Once the pandemic passes, Vinod told Lam that he wants to cook for her in his home. “It means a lot when someone wants to share a meal with you,” she said. “My family shows love through cooking. They’re like my extra grandparents.”

This article was originally posted on Penn Medicine News.