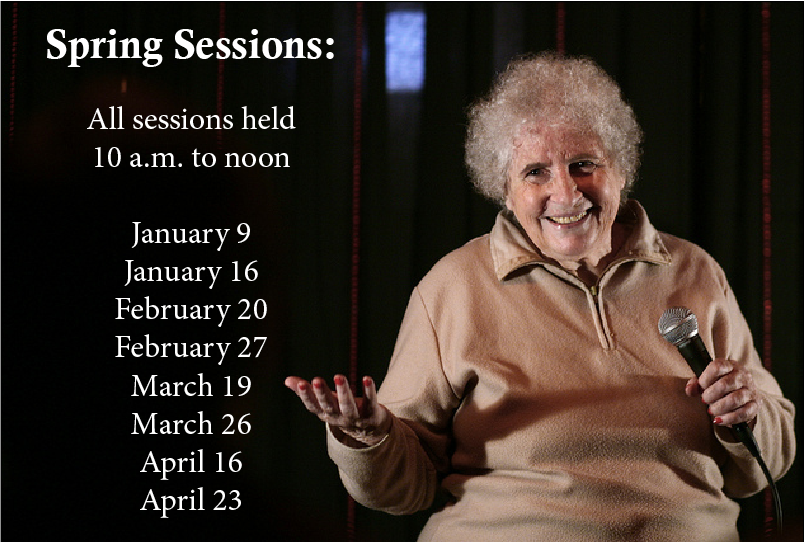 Les Wolff stood at the edge of the circle, introduced himself, and threw a punch into the air before him. For the next few minutes, anytime his name was mentioned, a punch was thrown.

It was all part of an improv exercise at the inaugural Cognitive Comedy workshop, presented by the Penn Memory Center. In this particular activity, participants were challenging their memory recalling both the names and unique actions from around the circle.

“For people who are getting older, it’s very important not only to exercise your mind, but to be aware that you’re capable of new things by not just what you’re doing but by watching what others do,” Wolff said.

In another exercise, Wolff and others improvised their way through a series of situational prompts.

“You had to think on your feet, and in a way that struck a funny bone,” said Wolff, who added the team effort boosted his confidence.

Cognitive Comedy is the brainchild of local comedian and PMC volunteer Leah Lawler, who held two trial sessions in 2015.

“I had an inkling that long-form improv keeps you sharper and improves not only cognition and memory, but confidence, trust, and agreement,” Lawler said. “In the trial classes, everyone described a feeling of connectedness, or a ‘new family’ from the group. It takes you out of your own head and creates group mind.”

Based on participants’ feedback, Lawler and PMC have decided to expand Cognitive Comedy to a free, eight-session workshop in 2016. All sessions will be held at Ralston House, 3615 Chestnut Street. The workshop will conclude with a improv performance in May at the Memory Café.

Register for the free, eight-session workshop today by contacting Tigist Hailu at 215-573-6095 or tigist.hailu@uphs.upenn.edu.