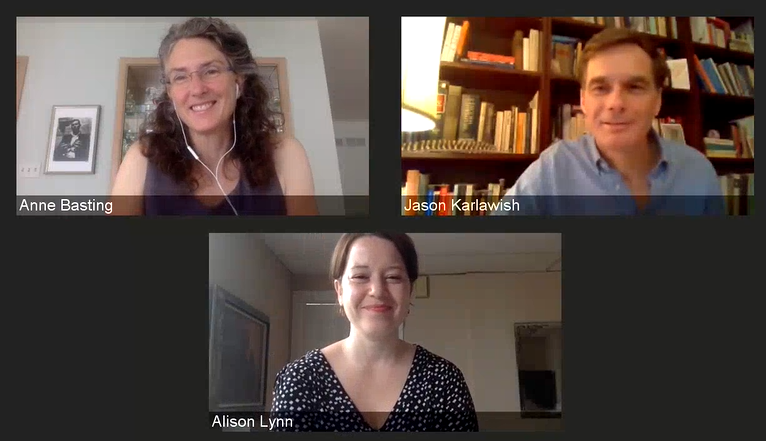 In 2019, after a quarter-century of scholarship in theater arts, Anne Basting, PhD was a veteran in the theatre world and experienced on many stages, but none like the stage at Morgantown Care and Rehabilitation in Morgantown, Kentucky.

It was the opening for the first of three adaptations of Peter Pan, performed at 12 rural nursing homes scattered across the state. Their take on the classic children’s story was born out of hundreds of sessions facilitated by Dr. Basting and trained volunteers from her TimeSlips organization and performed by residents, volunteers, and staff.

“These residents, several of whom had not been out of their rooms for months, were about to welcome an audience to see them and their nursing home in a completely new light. They were inviting their audience to see beauty and meaning in a place where most people only see overwhelming loss,” Dr. Basting recalled in a virtual discussion with the Penn Memory Center on Wednesday, May 27.

Stories such as Morgantown’s premiere of Peter Pan are replete in Dr. Basting’s new book, Creative Care: A Revolutionary Approach to Dementia and Elder Care. She sat down with PMC Co-Director Jason Karlawish, MD, and Associate Director of Social Work Alison Lynn, MSW, LCSW, as well as more than 50 guests, to discuss the caregiving techniques detailed in Creative Care, her journey and research in the process of writing the book, and what caregivers can do in the face of recent lockdown restrictions that are just beginning to ease up in many counties.

Dr. Basting joined the call from her Milwaukee home, where she teaches and works as a  professor of theater at the University of Wisconsin-Milwaukee and as a gerontologist that blends her experience in the arts with a desire to create safe spaces for creative engagement with older adults as a form of therapy. Over the last 25 years, she has developed this form of caregiving and made TimeSlips Creative Storytelling, her non-profit dedicated to training others in creative care and holding sessions for older adults with dementia.

This relatively new form, what Dr. Basting defines as “creative care,” is one she “didn’t even know was a thing to believe” when she started her career bringing the arts to elders.

One of her first experiences in creative care happened while she was volunteering in an Alzheimer’s unit in 1996. She found residents had great difficulty expressing themselves and answering questions. One morning, as she was leaving for work, she tore out a picture of the Marlboro Man from a magazine. The iconic image used by Phillip Morris to sell cigarettes, depicts a cowboy.

Rather than trying to prod the residents to recall who the Marlboro man was, she encouraged them to create his identity and back story. Her questions sparked a 45-minute story “full of song and laughter and joy.”

The Marlboro man was bestowed a new name, Fred Astaire, and he lived by a river in Oklahoma, which sparked a few soft-sung lines in the chorus of the classic musical.

Dr. Basting has found this type of therapy can prevent some of the struggles encountered in reminiscence therapy, another popular form of engagement that focuses on remembering past events and ‘living” in the past. Practices can even go as far in placing older adults in facilities designed to look like they would in the 1940s and 1950s.

While this can provide comfort for some residents in theory, it can also be a place of shame and embarrassment for many older adults with memory loss. In Dr. Basting’s experience, fact-based questions only have one “correct” pathway, a pathway that is likely broken. But with open-ended questions Dr. Basting saw a way to open up thousands of pathways for people to contribute.

Dr. Karlawish led the conversation about Dr. Basting’s work and noted that her approach was a part of a significant shift in not only the practice of care but how those living with dementia are viewed.

“Twenty-some-odd years ago I would have said ‘demented,’ not because I was a bad doctor. I like to think I was pretty good,” Dr. Karlawish said. “That’s just how my colleagues and I talked about patients…we robbed them of their personhood in the very words we used and the way we thought about them.’”

Dr. Basting read from her book including the opening scene at Morgantown, KY, and recalled her personal experience with the disease. Her mother was diagnosed with Alzheimer’s.

She gathered with her parents at their cabin in Wisconsin’s Northwoods where her father voiced his fears about the struggles to provide physical care to her mother. She sat back in the dining room for a moment and witnessed a tender scene between them.

“Have I told you how grateful I am for you,” her mother asked him softly. “Yes,” her father said, his eyes welling, “you have.” Her mother, Dr. Basting told the audience, was giving the “incredible gift of modeling how to receive care,” a subject that has often gone under the radar in exploring caregiving dynamics.  She posited that thinking about how being in need of care doesn’t make a person weak or a burden can allow the entire experience to strengthen relationships in all aspects of life.

Lynn joined in the discussion for a Q&A session. Comments from the audience sought ways to address frustrations with the time necessary for the creative engagement and the emotion when their care partners are grasping for an answer.

Dr. Basting suggests to lean on an improv technique known as “yes and” where no matter what the other person says, you reply “yes and…” to encourage them to flesh out their idea, regardless of whether they are “right.”

“Our goal is to figure out how not to stop when we feel that emotional flashpoint…when a symptom is revealing itself,” Dr. Basting said. “In that moment, to say ‘yes and…’ can be really hard to do but by doing that you’re joining the person where they are in that moment and sharing at that moment together.”

Dr. Basting explained her hope for creative care and TimeSlips is to develop more partnerships between the arts and clinical health and social services organizations. When the arts are involved in medicine and research, they’re often  brought in as a research tool. However, Dr. Basting thinks that arts and creativity could stand alone more often.

One way to adopt the ideas from TimeSlips is to practice some of the skills or activities in daily life. In times where resources are limited and large gatherings are banned, Dr. Basting showed the audience one simple way to bring the work of TimeSlips into their home.

She had attendees take out index cards to play a miniature version of madlibs. This small activity can be replicated in new ways over the course of forty days among other prompts available on the TimeSlips website. She developed the exercise recently while under quarantine.

“I hit a breaking point where I found it so hard to function…I thought if I could create a tiny little tiny exercise of creativity I would be able to feel that flow,” she said.

For this iteration Dr. Basting had the audience think of a place where they’ve spent a lot of time recently and something that moves fast. Then she asked them to fill in the blanks with “Imagine” and “was.” The result is a fantastical sentence such as “imagine the couch was a rocket ship.” Dr. Basting also encouraged drawing the scene they just created to enhance the creative process.

The power of creative engagement is not seen by the audience members but felt by the participants. In the version of the Peter Pan put on by the residents of Morgantown, Wendy is now in hospice care, entering the last stage of her life, preparing for one last trip to Neverland. Aging causes fear and loneliness for many. But by understanding what older adults are capable of and allowing them to show how they can create, not just retread the past, society’s view of aging can change as well.

One resident, Ruth, attended nearly every session at Morgantown. She was one of the dozen elders in the dance chorus who had come out to greet the audience before the show. Dr. Basting saw all of the performers smiling and laughing. All except Ruth, who had tears spilling down her cheeks. Dr. Basting asked if she was alright.