USA Today, citing a Finnish study presented on Sunday, July 13, 2014 at the Alzheimer’s Association International Conference in Denmark, says that everyday health activities can reduce someone’s risk of memory decline. The study is the first to examine the impact of the combination of eating well, exercising, keeping mentally and socially engaged, and managing obesity, high blood pressure and diabetes; other studies have looked at pieces of healthy lifestyles, but not the combination.

You can read the USA Today article here.

An article in the June 2014 issue of Managed Care examines the U.S. Preventive Services Task Force’s recent recommendation declaring that there is currently insufficient evidence to recommend early cognitive screening.

Author Susan Worley interviewed a number of experts in the field of Alzheimer’s disease treatment and research including Jason Karlawish, MD, professor of medicine, medical ethics, and health policy at the University of Pennsylvania, and Associate Director of the Penn Memory Center.

“Cognitive screening in a general population is obviously wrong,” says Dr. Karlawish. “Screening really must be focused on an older population. The lower we set the age, the more we increase the chance of false positive detection. I’m in favor of screening when the probability that you are going to pick up cognitive impairment is reasonably high, and that is in the setting of practices that care for older adults. Among geriatricians, I would say, it is a fairly standard practice to assess your patients’ cognition.”

American seniors have lost an estimated $2.9 billion in financial scams in the last decade, and financial institutions need to do more to protect them, experts suggested at a meeting on Monday. June 16.

Jason Karlawish, MD, professor of Medicine and Medical Ethics and Health Policy, told the Philadelphia Inquirer that this is a public health problem and called for a “reboot” of the financial services industry.

“Who are these people selling stuff to seniors as their job?” he asked at a panel on financial abuse of the elderly, sponsored by the United Way in Center City. Though he hates the terms, he said, such people should become “senior certified” or “senior friendly.”

You can read the Philadelphia Inquirer article here.

Myrna Roach and Donald Jackson are the Penn Memory Center’s first two participants in the Anti-Amyloid Treatment in Asymptomatic Alzheimer’s study (the “A4 study”), a historic prevention trial  which is testing whether a new investigational treatment, called an amyloid antibody, can slow memory loss caused by Alzheimer’s disease.

“There’s a family history  of Alzheimer’s disease,” says Ms. Roach, “so I’m interested in helping to find a cure for it, maybe in my lifetime.”

For more information about the A4 trial, click here. 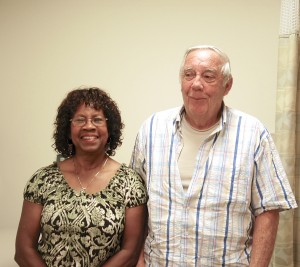 The A4 study is underway to see if an experimental drug can protect healthy seniors whose brains harbor silent signs that they’re at risk. On June 9, a Rhode Island man was hooked up for an IV infusion at Butler Hospital in Providence, the first treated. The $140 million study, funded by the National Institutes of Health, Eli Lilly & Co., and others, will track if participants’ memory and amyloid levels change over three years. The study is enrolling participants at more than 60 sites, including the Penn Memory Center. In an AP article published in June, Dr. Jason Karlawish, Associate Director of the Penn Memory Center, and a designer of the study’s psychological precautions, calls the research “an opportunity to study the future of the way we’re going to think about, talk about and live with the risks of Alzheimer’s disease.” You can read the AP article here.

In a Portland Tribune (Ore.) article about predictive tests for neurodegenerative diseases, Jason Karlawish, MD, professor of Geriatrics and Medical Ethics and Health Policy, says most physicians don’t want to be bothered with predictive tests. Karlawish directs the Neurodegenerative Disease Ethics and Policy Program at the Penn Memory Center. Karlawish says even the most predictive tests such as a genetic test for Huntington’s are inexact. They don’t tell those who test positive when they will get the disease. One study of people learning they tested positive for a gene associated with Alzheimer’s, according to Karlawish, did not show significant numbers of them lapsing into long-term depression or becoming markedly anxious.

“Does Chronic Insomnia Lead to Accumulation of Beta Amyloid?” Philip Gehrman, PhD’s pilot study, will measure beta amyloid and other metabolites in five individuals with chronic insomnia and compare them to five good sleepers. Dr. Gehrman, Assistant Professor in the Department of Psychiatry at the Perelman School of Medicine, University of Pennsylvania, says that the results of the study may help investigators understand how chronic poor sleep may increase the risk for dementia, and inform the development of interventions designed to reduce the likelihood of dementia.

David R. Roalf, PhD, a Research Associate at the the University of Pennsylvania Perelman School of Medicine, Department of Psychiatry, will be focusing on early indicators and detection of cognitive impairments. His pilot study, “Within-individual Variability as a Biomarker of Incipient Dementia in Mild Cognitive Impairment,” will measure neurocognitive variability in individuals with Alzheimer’s disease, Mild Cognitive Impairment and healthy aging to better understand the utility of the fluctuations in neurocognitive ability as an indicator of neurological integrity and its viability as an early indicator of cognitive impairment in MCI.

An Associated Press – NORC Center for Public Affairs Research poll of Americans shows becoming a caregiver to a frail spouse causes more stress than having to care for a parent or an in-law.

While 8 in 10 people who’ve been caregivers called it a positive experience, it’s also incredibly difficult. And while 7 in 10 who cared for a spouse said their relationship grew stronger as a result, nearly two-thirds said it caused stress in their family compared with about half among those who cared for a parent.

You can read more about the poll here.

The Penn Memory Center Choral Group, led by Darina Petrovsky, a Penn Nursing Science PhD student, gave a fantastic performance at The Watermark at Logan Square. Over the course of 4 months, the group rehearsed a selection of Eastern Orthodox Easter music, Russian folk songs and American favorites. The performance closed with a rousing sing-along of America the Beautiful. Click here to see photos.