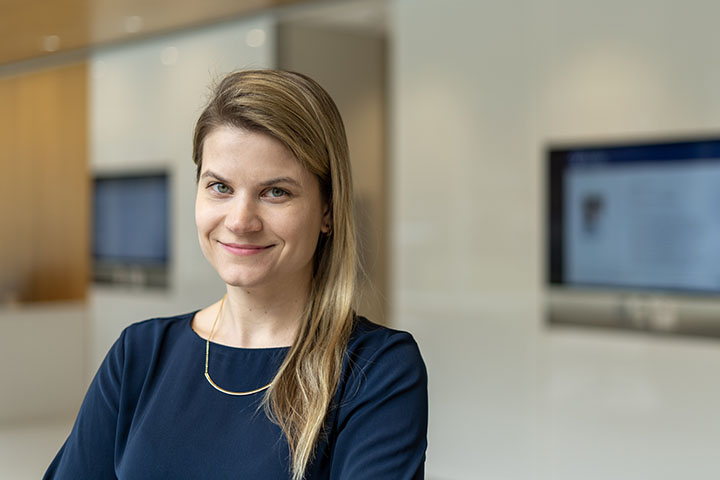 Karolina Lempert would like to know whom you trust.

She calls it “studying the neuroeconomics of long-term and short-term decision making in adults with cognitive decline.” Essentially, she is looking at how memory impacts judgment, part of new research she presented to Penn Memory Center (PMC) colleagues.

Lempert, PhD, talks a lot about economics. For her, the subject is intertwined with the realities of daily living whether we like it or not, but with one tweak in language to describe neuroeconomics — a combination of psychology, neuroscience, and economics.

“I like to use models and ideas from economics and see how people actually behave, which is a little different from classical economics, which is about how people should behave,” Dr. Lempert said. “We make decisions with our brain, so understanding how it works helps us understand more about our behavior.”

The post-doctoral scholar is working in conjunction with Joe Kable, PhD, in Penn’s Department of Psychology, and Jason Karlawish, MD, and David Wolk, MD, to study how well older adults remember what other people have done and why they choose whether or not to interact with them again.

To do that, she set up the “Dictator Game,” or what she calls “a proxy for screwing people over.”

In the game, researchers asked people if they would share $10 and how much would they share with an anonymous stranger they’ll never meet. From there the participants in the game fell mainly into a “selfish” group, those who took the whole $10, or a “generous” group, those who split it evenly.

Each photo of the participant was accompanied by the amount they shared and placed into a pool of other participants that was controlled for race and gender and later shown to adults from Penn Memory Center’s ABC cohort. The member of the ABC cohort was then be tested on their memory of the person’s face and whether that person shared by letting them between the person shown or someone at random.

The results seemed to explain a common experience: people can remember faces, but not much else other than the notion that they’ve met before. But in older adults, this forgetfulness can have a cost.

Older adults recognized nearly everyone from their photos before, but their ability to judge that person’s generosity was no better than a coin toss. If someone remembered the face of a “selfish” dictator participant but were unsure or incorrect about how much that person shared, they would choose to talk to the selfish person 70 percent of the time.

While Dr. Lempert and her team are still examining the data, she believes this result is due to people’s tendency to give familiar faces the benefit of the doubt. The team of researchers also asked a separate random set of people to rank the faces shown on attributes like trustworthiness, warmness, dominance and attractiveness. They found that a kind face doesn’t always mean a kind heart. Older adults would tend to choose faces based on trustworthiness even if they gave less.

“There was no correlation between how trustworthy someone’s face appeared and how much that person actually shared,” Dr. Lempert said. “It’s easy enough to recognize a face but hard to recall that additional information.”

This information is useful in explaining how and why older adults are often victimized by scams or greedy relatives, which took $36.5 billion out of seniors’ pockets in 2017 by some estimates. Lempert said there could be even more illumination when they’ve combined their research with imaging data ABC participants provided to Dr. David Wolk’s lab, like what regions of the brain, and therefore what types of memory, are accessed in their decision making.

Associative memory is a likely source for this type of decision making as it tries to tie two separate facts—like some’s face and how much money they gave you—together. Unfortunately, it is one of the first systems to decline with even normal aging, while the type of memory that recognizes faces sticks around, leading to the disconnect between the memory of a person and confidence in their generosity.

Results on improving associative memory are mixed. However, maintaining memory and brain health in general have been linked to diet, exercise, and social engagement.

Looking to the horizon in this field of study, Dr. Lempert is excited about using the data ABC participants provide to investigate issues of memory and choice and designing interventions to prevent financial abuse of older adults.

“We have a lot of good structural MRI data and Amyloid PET scan data. We’re excited to use all those resources to predict who is more at risk to get taken advantage of,” said Dr. Lempert.