Caregiving is an essential element to the safety and wellbeing of individuals living with Alzheimer’s disease and related dementias (ADRD). Yet, little has been done to understand the diverse experiences of caregivers who inevitably have different lives and identities.

Although there isn’t nationally representative data, an estimated 11 percent of ADRD caregivers identify as sex and gender minorities (SGM).

Dr. Kittle is dedicating her current research to fill this gap. 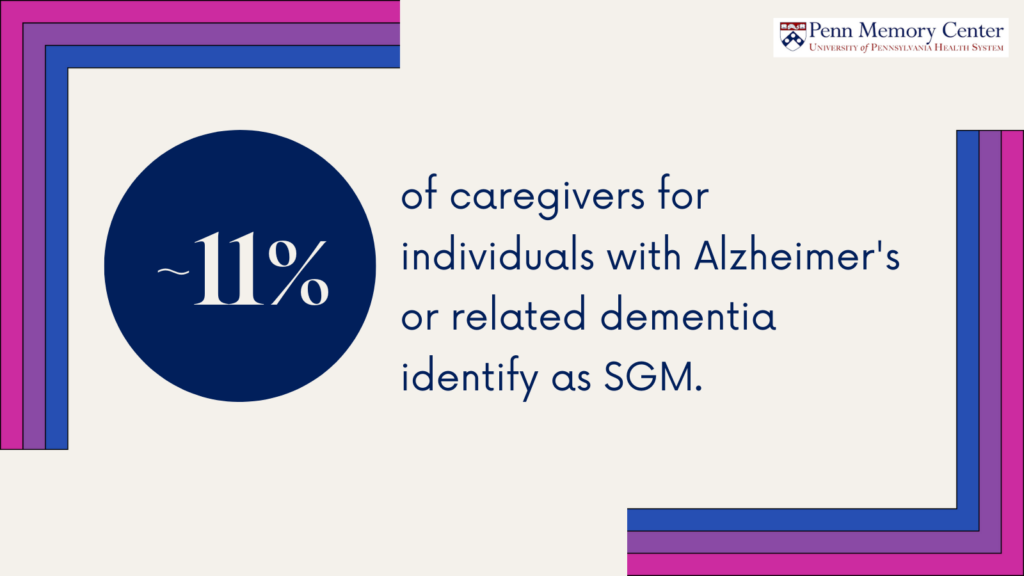 “They may be caring for someone who does not accept their identity, which is most prevalent amongst adult children taking care of their parents,” said Dr. Kittle.

Greater research is needed to fully understand these nuanced experiences.

While researchers have theories on reasons for these differences amongst demographics, there isn’t concrete data to support them yet.

In one study by Joel Anderson, PhD, CHTP, FGSA, mental health and caregiving experiences within SGM subgroups was examined. Results showed that without support, SGM caregivers face major disparities within their own health and wellbeing. Below are key findings: 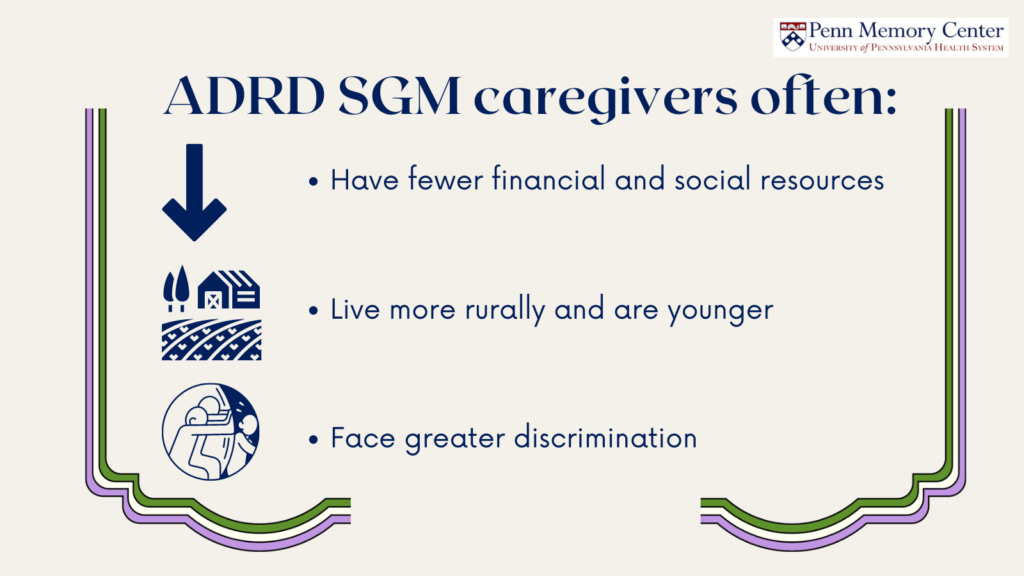 Like most caregivers, SGM individuals can find their role overwhelming. Yet, unlike non-SGM individuals, they often find support resources unapproachable.

Kittle suggests considering an example of a caregiver who is lesbian and takes care of her partner. If group facilitators frame questions on the assumption that she is taking care of a husband, this language is immediately exclusive.

“She automatically feels isolated. This lesbian-identifying caregiver may fear not being accepted by the group from the get-go, and uncomfortable correcting the language used,” said Dr. Kittle.

While greater research is needed to know the full extent of SGM caregiving experiences, Dr. Kittle advocates for intervention measures that create a safe space for all.

Changes can be as simple as referring to spouses as partners instead of assuming husband-and-wife.

Having support groups that are specific to SGM identifying individuals, and even subgroups, such as bisexual caregivers, would also improve SGM caregiver’s sense of community and comfort.

Within the clinical space, creating an environment of holistic care begins with physicians having knowledge about the SGM experience.

Tying back to research needs, an understanding of SGM caregiver demographics is crucial to providing supportive care. It’s also important to acknowledge that, like non-SGM caregivers, SGM caregivers also experience many positive aspects to their role.

“The goal is to have caregivers feel welcome and comfortable speaking freely, without fear or shame, to their clinicians,” said Dr. Kittle.

If you or someone you know identifies as an SGM caregiver, Dr. Kittle is currently enrolling participants for multiple studies.