You are here: Home / News & Events / RSVP: Premiere of Moment to Moment, Love and Resilience in the Face of Alzheimer’s

Moment to Moment isn’t a story about Carl’s Alzheimer’s disease, but it does tell that story.

It isn’t an origin story about the unique works of art Susan helped create, but it tells that story too.

“I liked being in their presence. It was something I couldn’t quite put my finger on, but it was clear that their love was deep,” said Attie, director of the Film and Video Program at the University of the Arts. “They have this really wonderful world.” 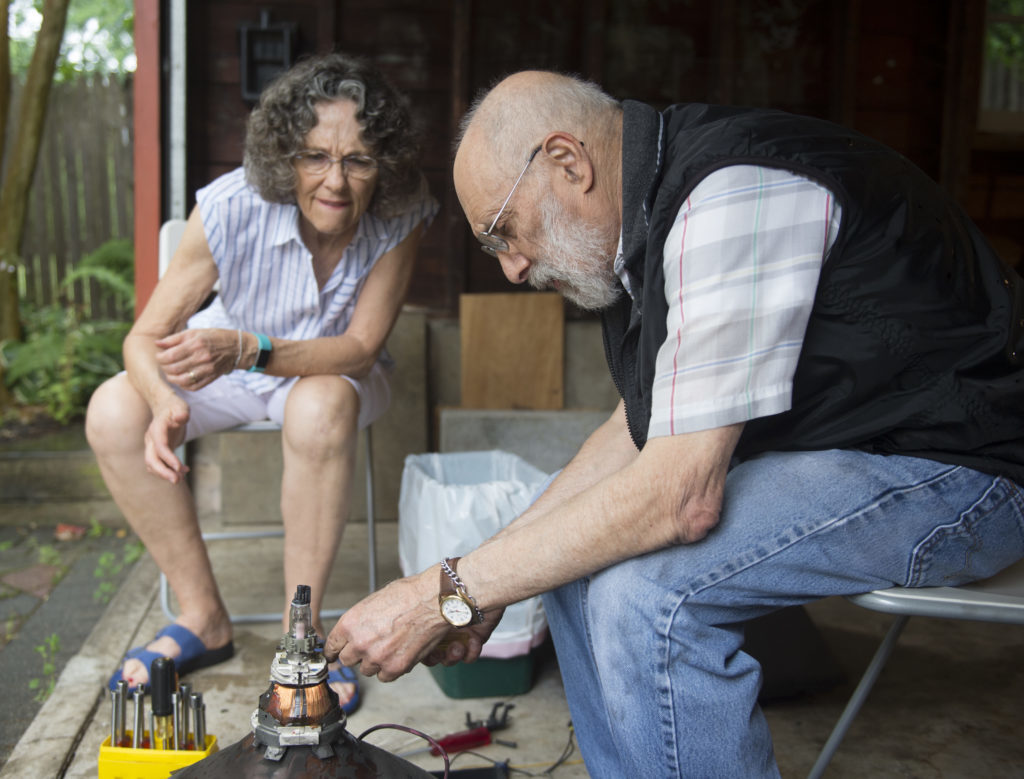 Susan Jewett and her husband Carl make artwork from copper they get from Carl dismantling televisions at their home in Havertown on Tuesday, July 7, 2017. Carl, 80, was diagnosed with Alzheimer’s disease three years ago and is a patient at the Penn Memory Center.

Carl was diagnosed with Alzheimer’s in 2014. A scientist, Carl struggled with the cognitive changes that made him unable to engage in the scientific inquiry of his prior career. So he started digging for copper; dismantling discarded electronics in search of the valuable metal inside.

In the beginning, the search for copper kept Carl engaged, but it became something more.

As an artist, Carl’s wife Susan saw something beautiful in the bundles and spirals of copper, a shared artistic collaboration.

“And Carl still had so much to offer. He still had this spark that got Susan excited,” Attie said. “All of the copper strands that had been previously been discarded on the table or collected in plastic bags were now sitting inside picture frames. What was initially probably overwhelming or incomprehensible to Susan became this shared activity.”

Although Moment to Moment is Attie’s first film about dementia, he is no stranger to the medical world. But despite his filmography, “it was never my intention as a filmmaker to work in the medical genre,” said Attie. From focusing on a VA Hospice unit to teenaged in-patients at the Seattle Children’s Hospital, his work has explored the challenges and victories of patient life.

Most of Attie’s medically-focused films are observational, focusing on the experiences of having cancer or being in isolation.

“There has always been a real concern around sensitivity with working with people with terminal or serious illness,” he said. “I respect that and understand that, but I also think it’s really an opportunity to give people a voice in that time.”

Attie was introduced to Carl and Susan through Theatre of Witness founder Teya Sepinuck. One day, Attie showed up at the couple’s house and began hanging out.

“I find their home to be a wonderful place. Really safe and warm and comforting,” he says. He filmed with them on-and-off for a year and half.

Moment to Moment will screen at the University of Pennsylvania April 25, its first public screening. Admission is free, but RSVP is required. A panel discussion will follow the short film.

Video: Diet, Aging, and Your Brain