You are here: Home / News & Events / Remembering Bill Lyon, by ‘the man in the white coat’ 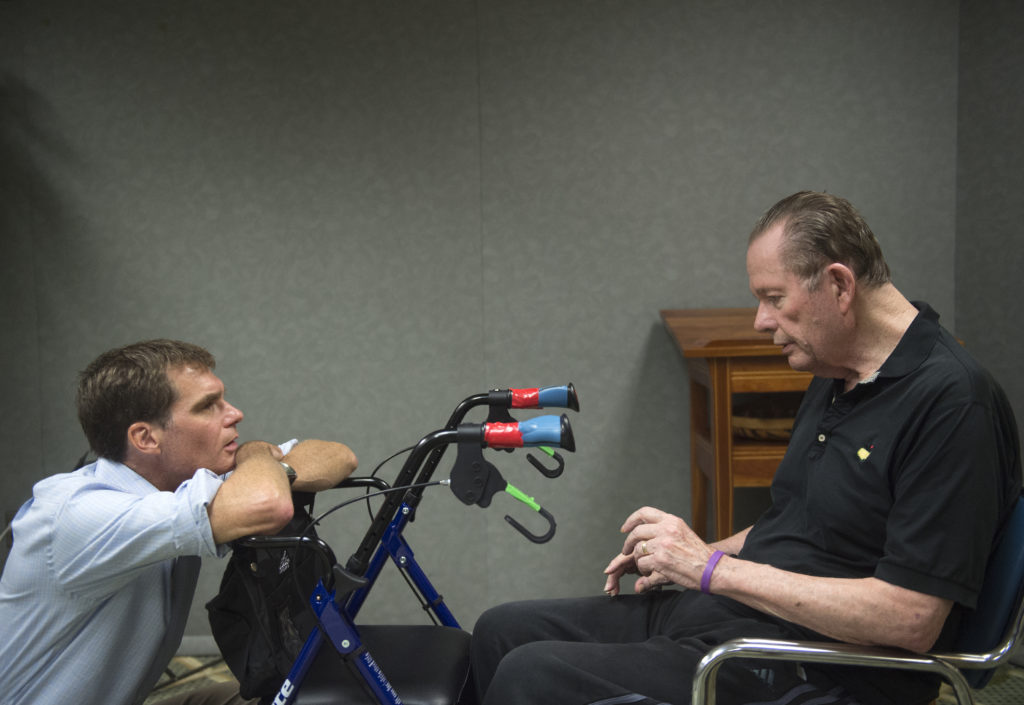 It was the fall of 2017 when I went out to visit Bill at his home, not as “the man in the white coat,” as I’d been dubbed in his columns, but as an interviewer looking to understand what made him so fearless.

Fearless, not just to accept the Alzheimer’s diagnosis I had given him four years earlier, but to shout it out from the tallest tower he could scale.

Fearless, not just to live with the loss of his cognitive abilities, but to put them on display to a world that had so treasured his mind for decades.

Fearless, to celebrate the circle of life and acknowledge his place in it.

“You pass along the baton, and you hope you’re leaving behind you somebody who can pick up and follow,” he told me that day.

In the industry he helped shape, the baton is carried by countless young writing talents. Mike Sielski recently penned a brilliant column eulogizing his late mentor, writing that Bill had “shown more dignity and vulnerability and bravery than just about anyone you’ve ever known. He is the standard here, and he always will be. We will never find another.”

In his family, Bill had long ago passed the baton into the small hands of his great-grandson, Liam, whose early years met Bill’s decline in the circle of life he often discussed in his columns. I had asked Bill to reflect for a moment on that recurring theme, and in the voice found on decades of newsprint, he shared with me a story of taking a walk with young Liam:

“We were out one day and came to a little hill. He scampered on up, and I huffed and puffed my way,” he recalled.

He breaks, looking down at the ground for a moment.

One baton, however, has been left on the track, waiting for the next fearless individual to take on “that sewer rat, Al” as proudly and publicly as Bill took on his fight against “Al,” his moniker for the disease that was slowly chipping away at his autonomy. And that baton could be a most powerful tool.

Researchers at the Penn Memory Center and around the globe are testing drugs to slow the pace of cognitive decline. This work is going to take some time, but we’ll get there. Alzheimer’s disease will be treatable, but this is a complex disease. An effective treatment likely will help many but not all persons with dementia.

Simply put, like cancer and heart disease, we should expect that Alzheimer’s disease will be treatable, and as well, that we’re going to have to learn how to live with this disease. That starts with learning how to live with — and love — those who have it.

My Penn Memory Center colleague Shana Stites, PsyD, has done groundbreaking work on the stigmas of Alzheimer’s disease. She discovered that public stigma often comes from a general lack of understanding about the disease. Researchers and organizations are working to develop large-scale messaging campaigns to fight the ageism, and negative emotions that too often follow an Alzheimer’s diagnosis.

None of this would be necessary if we had more people like Bill Lyon. People living with dementia who are unashamed and unafraid to describe the challenge of eating peas with a tremor, the sense of relief from turning over finances to a son, the dark humor than can be used to describe one’s incontinence are prize fighters who knock out stigma.

Bill made a career as a sportswriter and columnist, but he ended it as the autobiographer of his disease. I asked which was his legacy. He didn’t miss a beat: “That’s easy.”

“If you can go your whole life and make one memorable thing,” he told me, “then you’ve had a well-spent life.”