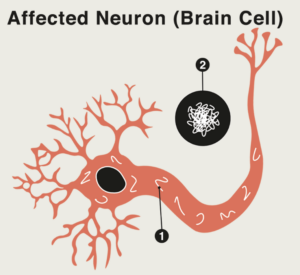 Graphic representation of a neuron with amyloid plaques (2) and tau tangles (1), signs of Alzheimer’s disease. (by Nina Miller)

Last week, the journal Science reported that an Alzheimer’s disease scientist may have fabricated research data, particularly in one influential study on the role of amyloid as one of the causes of the neuron death seen in persons with Alzheimer’s disease.

The journal Nature, which in 2006 published the work of Sylvain Lesné of the University of Minnesota (UMN), Twin Cities, announced the paper is under investigation.

“My colleagues and I are truly disappointed over these accusations of image manipulation and presentation of false data. Science lives by an honor code that is essential to the progress we all hope to make. Unfortunately, these kinds of issues with scientific integrity have arisen in many fields of research, and it is clear that Alzheimer’s disease research is one of those,” said Dr. David Wolk, director of the Penn Alzheimer’s Disease Research Center (ADRC) and co-director of the Penn Memory Center.

“Fortunately in this case, there has been much parallel work in the field. Failed attempts of replication of the data of this particular scientist have avoided significant misdirection of work stemming from these findings. However, this does further accentuate the need for replication studies to be well-funded and published to assure novel findings are correct.”

Though this one particularly study “may be problematic,” it does not change that beta-amyloid plays an important role in Alzheimer’s disease, said Dr. Edward Lee, a neuropathologist and associate director of the Penn ADRC.

“I have seen some of the data images. They do seem to show that changes were likely made. However, I am a strong believer in due process and urge everyone to wait for a full investigation to be conducted. More importantly, science is very rarely driven by a single piece of data or one published paper. Rather, our understanding of Alzheimer’s disease comes from many decades of research where different studies and publications forms layer upon layer of corroborating evidence,” he said.

“Just because one study may be problematic does not cause the entire field to collapse. My read of the literature, with or without this one study, is that beta-amyloid remains one of several important factors in the pathogenesis of Alzheimer’s disease.”