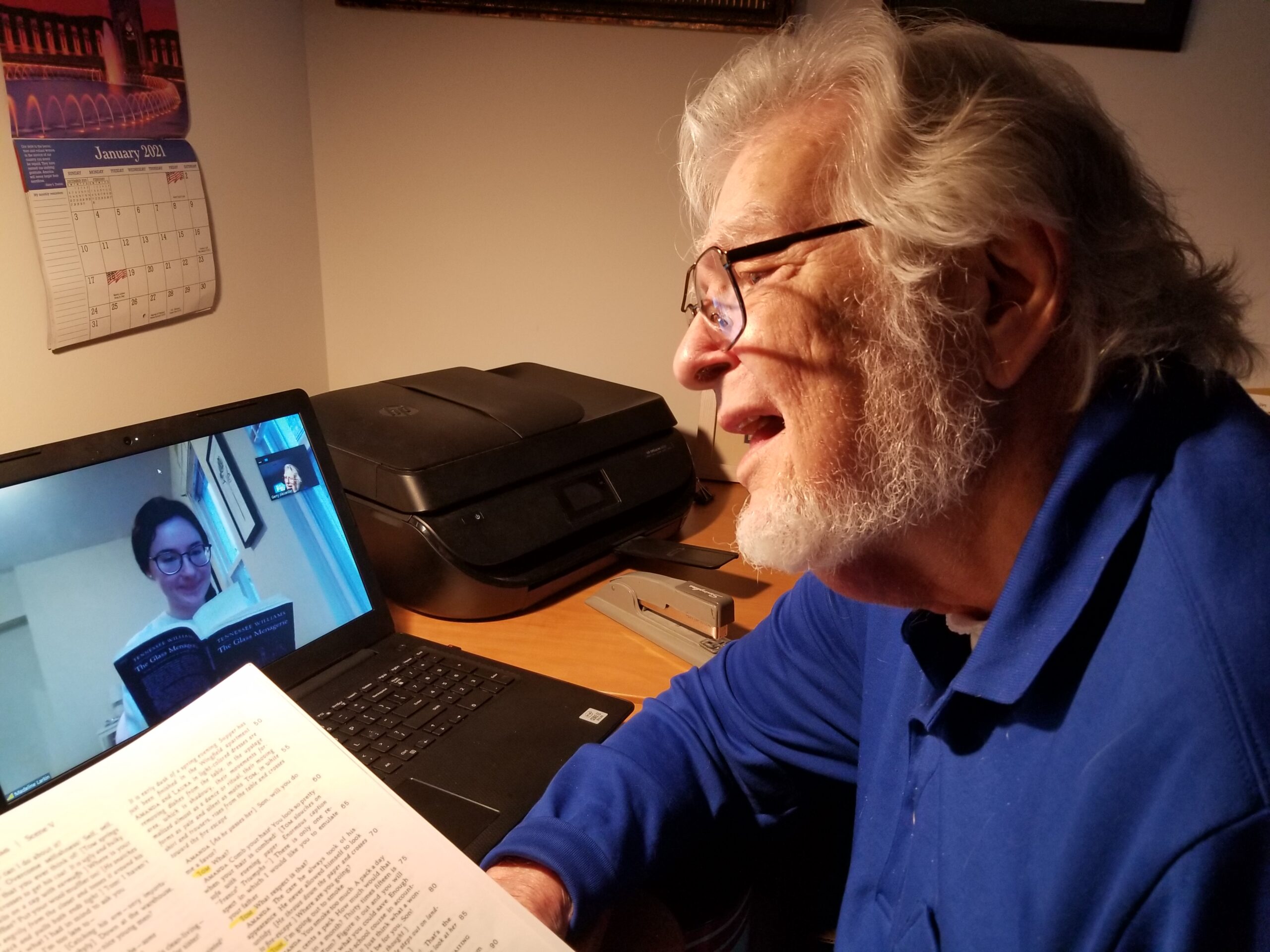 Gerry Alexander, right, and Maddy Larkin read “The Glass Menagerie” by Tennessee Williams during a recent Weekly Smile session. Knowing that Alexander had acted in community theater, Larkin sent him a copy of the play, along with other readings.

In the middle of the pandemic, many older adults have found themselves more isolated than before, with their connection to the outside world restricted and the emotional toll of being at a higher risk for the virus. A national survey conducted by the University of Michigan National Poll on Healthy Aging found that 56% of older adults reported that they were feeling of isolated in June 2020.

During this time, the Penn Memory Center offers an iteration of the Time Out Respite Care program, which encourages social engagement and companionship in the lives of older adults with cognitive impairments by connecting them with college students.

Titled Weekly Smile, the program started in June and is run by Meg Kalafsky, a research and program coordinator at the PMC. It is conducted completely online. Students and older adults chat and engage with each other via video call or the phone for 45 to 60 minutes per week.

“The previous program was set up to have positive impacts on people’s anxiety, depression and overall stress levels,” Kalafsky said. “I think, with the current version, what we’re really effective at changing is someone’s stress and their isolation. I think it’s been challenging, but also at the same time, I think one of the real benefits of this pandemic is that people are really willing to try something new and to be creative.”

The original program brought students to the homes of older adults to spend leisure time with them with the objective of engagement and companionship for six to eight hours per week. Students often helped with simple housekeeping and any other activities that made the lives of their older companions easier.

In the current iteration, students focus on engaging with their companion through games, virtual visits to museums or bird watching websites, and online classes. Kalafsky described students in the program helping the older adults navigate technology, make origami and learn about each other’s lives.

“We recognize that some families have accessibility issues with technology and that digital fatigue is a common problem during the pandemic as well,” Kalafsky said. “So that’s why we significantly decreased the time. We cared more that the interaction was genuine. And that people were enjoying themselves with each other and really creating a relationship where they cared about each other.

Estelle Alexander, a caregiver whose husband was diagnosed with mild cognitive impairment approximately seven years ago, found the program helpful as she navigated the diagnosis.

“It’s especially important since we have been so stymied by the pandemic, where we’re stuck and unable to get out, engage and interact otherwise,” Alexander said. “The Weekly Smile program is a very nice opportunity to engage in another way that we wouldn’t be able to ordinarily. It gives him a person to relate to, on his own. And it gives me a chance to take a little, much needed break.”

Additionally, participants of the program are also able to access other programs at PMC such as Shake It Up, a virtual exercise program focused on coordination, muscle activation and meditation. This provides some support for caregivers for a few hours during the week.

“The overarching objective of the program is for older adults to have fun,” Kalafsky said. “But it’s also for caregivers to get a break, for someone else to provide some respite for them on a consistent basis.”

Undergraduate students as well as students pursuing graduate degrees can apply for the Weekly Smiles program. Once chosen, they undergo two training courses that focus on dementia, the program’s model and preparing them for the needs of their companion.

“She [the student] has worked just so hard and so diligently and so positively with him, to be able to respond to him, and to get him interested in the conversation,” Alexander said. “She is researching the kinds of things that she can present to Gerry for a wonderful conversation. She really has worked hard and has responded to his interests.”

The student, knowing Gerry’s love for acting and experience in community theatre, presents him with scripts to engage with. The three of them meet once a week to read and act out scenes from famous plays and films like Interstellar and The Glass Menagerie. Additionally, they listen to recordings of Gerry’s favorite music, singing along as the student plays accompanies with her ukulele.

Older adults interested in the program can apply though the website. Kalafsky and her team conduct interviews to understand what participants are looking for through the program, their interests and their cognitive conditions, before connecting them with a suitable student.

“One thing I like to highlight about the program is that it is beneficial to everyone involved,” Kalafsky said. “It supports the caregiver. It supports the older adults, providing them with engagement opportunities where they’re in charge and I think that’s really empowering for older adults. Even the students gain learning experiences and socializing opportunities, because we recognize that they’re also feeling that isolation, just like our older adults, even if maybe not to the same degree.”