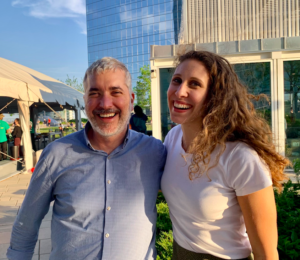 Stockbower came to the center as a research specialist in 2013, after studying psychology and neuroscience at Haverford College. She worked exclusively on studies led by Dave Wolk, MD, PMC co-director.

“We are extremely lucky that we had an opportunity to work with Grace over these last 8 years,” said Dr. Wolk. “She has played a tremendous role in the culture and operation of the Penn Memory Center and our research studies.

“I also know, based on many comments I have received from our patients, that she developed a strong bond and supportive relationship with our participants. We could not be prouder of her development during her time with us and are certain that she will go on to do great things with the rest of her career. She will be missed.”

While at PMC, Stockbower earned her master’s in public health from the University of Pennsylvania in 2017. Over the years, she has had many roles working on clinical research trials and pharmaceutical drug trials. As a clinical research coordinator, she worked on the trial for Biogen’s Alzheimer’s disease drug, aducanumab.

“That was a big step for me, in my career,” Stockbower said. “It just felt really special to be a part of such a pivotal study and to be a guide for patients who are giving their time for this effort through this complex process.”

Most recently, Stockbower was involved in project management and study coordination of the Biogen, Pegasus, and LEADS trials.

“The most meaningful part of my job has been forming connections with our participants, learning about them, and understanding why they are interested in participating in our research,” Stockbower said. “I’ve learned so much from them and from the people who work at PMC as well. The fact that my mentors and colleagues have helped me grow has really meant a lot to me.”