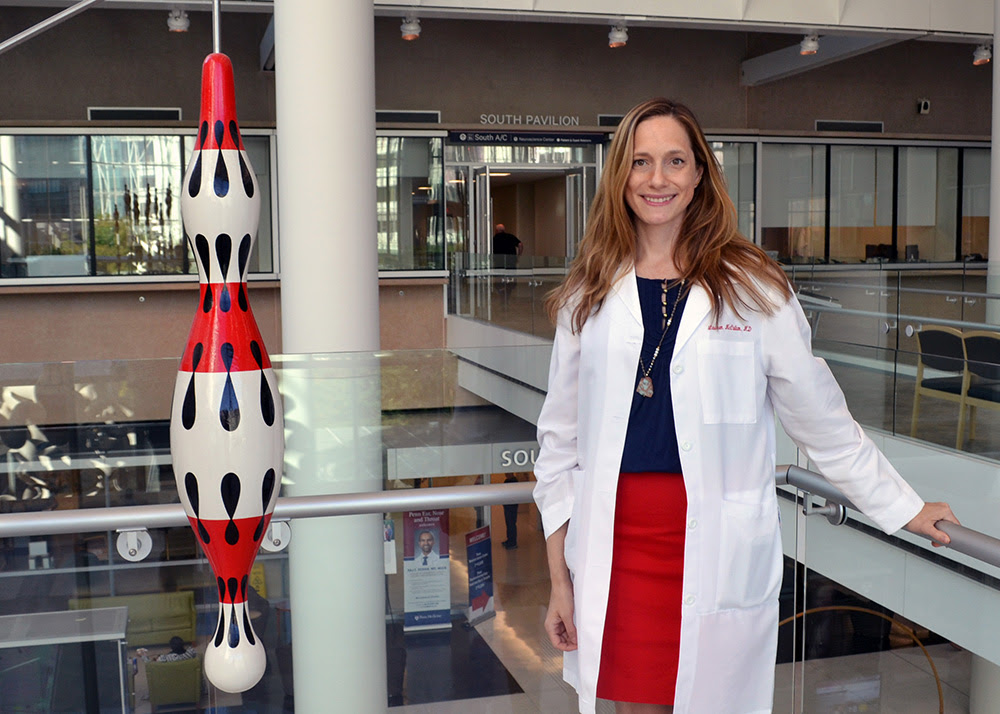 It’s been more than a year since Lauren McCollum, MD, concluded her time as a trainee at Penn Memory Center, but mentorship and grant support have kept her in close collaboration with the site of her fellowship.

While at Penn, Dr. McCollum was a medical student at the Perelman School of Medicine, a neurology resident, and ultimately a Cognitive and Behavioral Neurology Clinical Fellow at PMC. Today she is a clinician and researcher at the University of Tennessee’s Pat Summitt Clinic. She is also a clinical assistant professor at the university.

At both centers, her ultimate priority was the same: to give quality care to each of her patients and their families.

“There’s this amazing human component to this where you’re supporting families and supporting people going through something that is really, really hard,” she said. “A slow, chronic, often fatal progressive disease of the brain.”

An Alzheimer’s Association grant has allowed her to continue her research with PMC Co-Director David Wolk, MD, and other collaborators for three years. And that collaboration led to a recent publication on the relationship between certain biomarkers (measurable biological substances that are indicative of a certain disease), of Alzheimer’s disease and the type of cognitive impairment they cause in the individual.

The key to understanding this paper, Dr. McCollum said, is knowledge of the A/T/N research framework from The National Institute on Aging and Alzheimer’s Association. This framework classifies individuals in relation to them either having or not having each of the three Alzheimer’s disease biomarkers: A (amyloid), T (tau), or N (neurodegeneration).

Her research focuses on a different group of cognitively-impaired individuals than this traditional Alzheimer’s disease group. Dr. McCollum and her colleagues are interested in a group they call “mismatch-MCI,” where there is amyloid and neurodegeneration present but not tau. This group, represented as A+/T-/N+, cannot be following the traditional Alzheimer’s disease pathology, as that sequence of events includes the presence of tau. Dr. McCollum’s hypothesis was “that this mismatch-MCI group should have a less Alzheimer’s disease-like presentation both in terms of baseline cognition and longitudinally in how they change cognitively over time.”

In other words, Dr. McCollum said, “those people are thought to have an alternate driver of their symptoms that is not Alzheimer’s disease.”

With this difference in disease pathologies established, her next step was to determine how the pathology differed.

Dr. McCollum and her colleagues, “found that the mismatch-MCI group was less Alzheimer’s disease-like in that they had less memory predominant presentation, they didn’t decline as aggressively over time, and they had less widespread atrophy in their brain.”

Instead, this mismatch-MCI group ended up presenting itself similarly to the neurodegeneration-only control group, a group with known non-Alzheimer’s disease pathology due to their lack of both amyloid and tau.

Ultimately, Dr. McCollum found her research to support her hypotheses and remains grateful to the Penn Memory Center for the collaboration.

“Dr. Wolk was very instrumental in guiding me to this particular topic,” she said.

“Oh brother, where art tau? Amyloid, neurodegeneration, and cognitive decline without elevated tau” (2021) can be found in NeuroImage: Clinical.

A Celebration of Hope: Training

A Celebration of Hope: Clinical Care