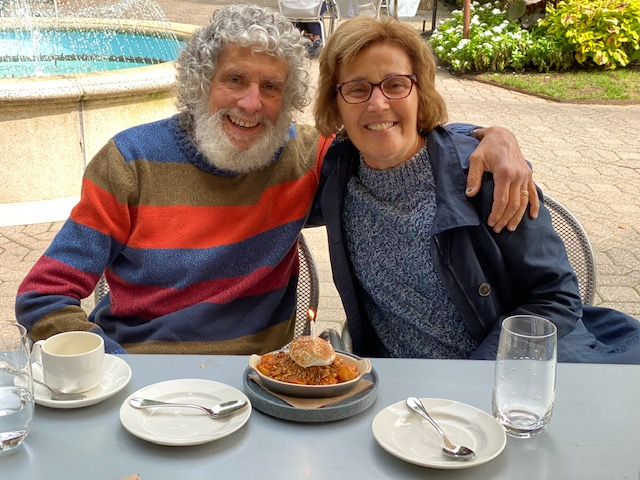 Six out of seven days a week, Deborah Maser used to drive herself to Trenton, New Jersey to a jazzercise class in the mornings. She was diagnosed with mild cognitive impairment in 2018 and was an avid jazzerciser. On Wednesdays, her husband used to take the train to Philadelphia to teach at the University of Pennsylvania School of Dental Medicine. Her daughters would visit her that day to make sure she wasn’t alone for more than a few hours.

A routine had been set, only to be disrupted in March.

“When the pandemic struck, jazzercise had stopped – as did dental school, of course – for several months,” Dr. Maser said. “And it became a little bit more stressful because my wife had nothing to do in the mornings.”

The pandemic has seeped into nearly every aspect of caregivers’ lives. With increased health risks, mental stress and adjustments to a virtual world, caregivers across the country found themselves faced with new challenges.

The Penn Memory Center (PMC) began the Caregiver Forums in March 2020 in an attempt to provide caregivers a space where they could talk freely and share advice as they learned to navigate caring for their loved ones during the pandemic.

“I open up the forums by telling people it is a place for you to come to listen and talk,” Greenfield said. “The forums are a community-like place to come together, get and receive support, and also share tips or ideas that may be working for you.”

The first round of the forums began in the spring and the second round started November. Early on, Greenfield and her team noticed a distinct divide in the experiences of the caregivers based on the problems they were dealing with.

“When the pandemic came, we really began to see two camps of caregivers: those who were caring for loved ones at home and those who were separated from their loved ones who were in nursing homes or memory care facilities,” Greenfield said.

For caregivers at home, questions arose about the safety of bringing help (in the form of a home care aide) into the home, and conflicts regarding risk management. On the other hand, most caregivers with loved ones in facilities have not seen their loved ones since March and struggle with lack of information, worries about restricted social interaction and the emotional toll of being separated during unprecedented times.

The forums are open for all to attend and moderators do not adhere to a structure.

“Sometimes the conversation veers more towards logistical questions about professional caregivers, how to explain the pandemic to their loved one, or activities that help your person to be engaged and stimulated,” Lynn said. “And then we also have a lot of emotional themes. Many talks about fatigue, burnout, and ‘Oh god, when will this end.’”

The Masers have had to come up with alternative ways to keep themselves occupied and engaged. They began to take walks and read the newspaper. But everything’s different. Deborah forgets headlines a few minutes after reading them and she no longer remembers to call her friends back.

“She just doesn’t have to get-up-and-go that she used to have,” Dr. Maser said. “And I’m blaming that partly on the pandemic, partly because she’s not exercising like she did in jazzercise, and partly because it’s a disease.”

Lynn and her team have seen a notable decline in patients’ health across the board.

“For most of our patients that are diagnosed with Alzheimer’s disease or a related dementia, we expect the progression to be very incremental and very slow over the course of seven to 10 years for many people,” Lynn said. “But we have seen that – when stripped of a lot of the things that are so important to keeping our patient stable, like regular social interaction, and routine and stability, and regular help from the primary caregivers, family and friends – they’ve just declined a lot faster.”

This puts an increasingly larger strain on the caregivers.

According to the Alzheimer’s Association, in 2019, there were more than 16 million people caring for loved ones with Alzheimer’s disease.

“I would say, certainly don’t think you’re doing this alone,” Dr. Maser said, as a message to other caregivers. “I think the biggest thing is not to put yourself on an island and think that you’re doing this alone. Because there are so many other people on the island that you can’t see and they are willing to help.”

The forums provide caregivers space to vent and gain emotional support from other caregivers in similar positions.

“You get the power of crowdsourcing,” Lynn said. “You also get a feeling of being included in something, being understood, and being seen and validated for all of the hard work you’re doing as a caregiver in this one-on-one interaction.”

Lynn also said that the forums provide her team with the opportunity to learn what caregivers need and what PMC can do to help. In March, most of PMC’s suite of services were adapted to be online. This move included support groups as well as programs like Memory Café and Weekly Smile.

“Being a caregiver is 24×7 job,” Dr. Maser said. “The caregiver forums give me a chance to hear what other people are going through, pick up some tips in terms of home care like what to do in certain situations where there’s constant repetitiveness in what my wife will ask me.”

The upcoming Caregiver Forums will be facilitated by Anna Kozlowska and Kelli Sloan. View the schedule and register here.