You are here: Home / News & Events / #BlackInNeuro builds connections, community around the world 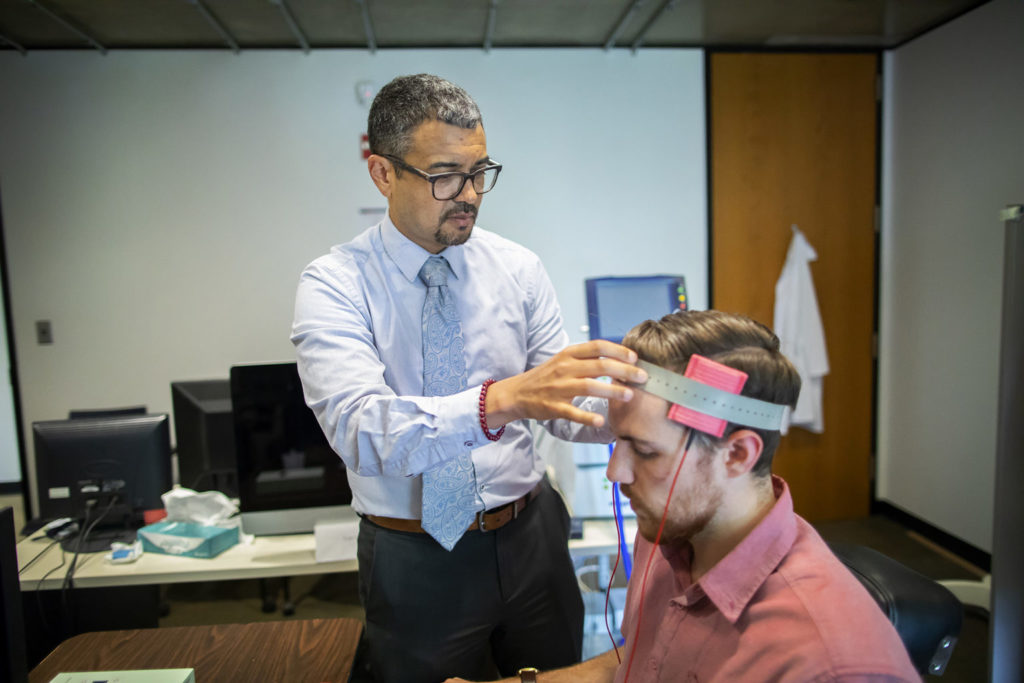 Close your eyes and imagine a person with Alzheimer’s disease. Now open them. Is the person you imagined Black?

If not, maybe they should be, according to Penn Memory Center Neurologist Roy Hamilton, MD, MS, an associate professor of Neurology and Physical Medicine and Rehabilitation at the Perelman School of Medicine. “Looking at the relative prevalence of the disease in different populations, the prototypical person you imagine when you close your eyes ought to be Black or Latinx, because the risk of Alzheimer’s disease and related neurodegenerative conditions is so much higher in communities of color.”

Specifically, Black individuals in the U.S. are 64 percent more likely to develop Alzheimer’s disease than their white counterparts, according to a 2016 meta-analysis of six studies looking at the prevalence of the disease among different races and ethnicities. This higher incidence is the result of a variety of factors, with socio-economic inequity and chronic stress resulting from systemic and persistent racism likely chief among them.

“This striking disparity in neurodegenerative disease risk is not something that is widely discussed,” Hamilton said, “in part, because there is very little diversity in the physician workforce working with these patient populations, so it’s not something that has historically been widely focused on by the community of individuals who do this kind of research. There are certainly people who do focus in this area, but clearly the level of risk posed to persons of color by this disease has not become common medical knowledge in the way that risks for other diseases have.”

A new initiative hopes to address the disparities in diversity in neuroscience — Black in Neuro. Debuted on Twitter this summer, the initiative was organized by 22 graduate students, postdocs, and professionals from universities and institutions around the world to highlight Black excellence in the field. Through a website and on social media, the group aims to connect students and trainees with mentors, showcase Black scholars, and build community and awareness about the lack of equity and inclusion in the field. Many Black faculty, students, and scholars from Penn are featured on the website.

Building (and Finding) a Community

One of Black in Neuro’s main objectives is to maintain a searchable directory of Black students, post-docs, and faculty designed to showcase Black researchers and scientists and also serve as a place to source trainees, speakers, and mentors. Building a community of Black neuroscientists to share struggles, successes, and find opportunities, the Black in Neuro organizers hope to fill a void that often exists in labs and programs.

In 2019, eight percent of enrolled students and six percent of faculty in academic medical institutions were Black. That means medical school is not only the same stressful struggle it is for all students — Black students have the added burden of often being the only person like them in the room. Among medical fields, neuroscience in particular struggles with a lack of diversity. According to a 2017 study published in the Journal of Undergraduate Neuroscience Education, 2.77 percent and 1.97 percent of PhD graduates were Black women and men respectively.

Hamilton said it’s more important than ever to build academic pipelines — a metaphor for efforts to decrease the attrition of underrepresented students between high school and attaining graduate degrees — but he also notes that’s not the only issue.

“We also need to think about addressing systemic biases in academia that help to perpetuate the underrepresented status of racial and ethnic minorities, things like the criteria used to evaluate applicants, appointees to faculty positions, and candidates for promotion,” Hamilton said. “When my colleague Cary Aarons, MD, an associate professor of Surgery and director of the general surgery residency program, took the helm of the surgery residency program he shifted its central criterion for selecting prospective residents to the question of whether the track records of the applicants reflected the core values of the department, with immediate and dramatic results on the diversity of recruitment.”

As vice chair for inclusion and diversity of Neurology and assistant dean for cultural affairs and diversity of Perelman, Hamilton is working to implement initiatives to increase diversity in his field. In a 2016 piece for Annals in Neurology, Hamilton noted several ways to do so, from retaining diverse trainees, sponsoring medical students for enrichment opportunities, and helping students, and faculty, cultivate and maintain formal and informal mentorships.

“These formal and informal relationships can help junior faculty overcome critical gaps in process knowledge and professional networking,” he said. 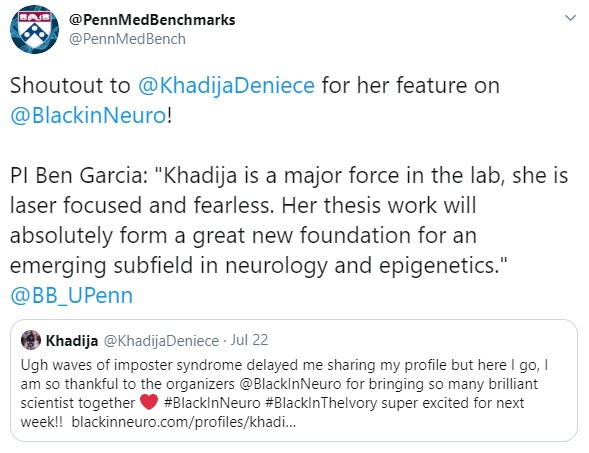 Khadija Wilson, a fourth-year PhD student in Systems Pharmacology and Translational Therapeutics at Penn focusing on neuropharmacology, uploaded a profile to Black in Neuro. She said sharing academic space with other Black students and Black faculty is vital.

“Navigating this space is a challenge, and a way of overcoming that is finding other Black graduate students to share the burden, or just have as an outlet, that really helps me feel more inclined to be where I am and stay in this field,” she said. “Most of the time in grad school you’re moving out of state, you’re away from your family and friends, you’re away from your significant other. And then on top of that, if you’re Black, you’re surrounded by people who don’t look like you, who probably have not had many similar experiences to you, and maybe who even speak and think differently than you.”

Melanie Schaffler, Wilson’s co-president in the Ernest E. Just Biomedical Society at Penn dedicated to retaining underrepresented minorities, also has a profile in the directory and echoes Wilson’s sentiment.

“It can all be summed up to feeling isolated,” said Schaffler, a fourth-year PhD student in the Neuroscience Graduate Group. “That is the common theme of being a Black person in college, in science, in medicine.”

Schaffler said she’s grateful to have a Black mentor at Penn, Ishmail Abdus-Saboor, PhD, an assistant professor of Biology who earned his PhD at Penn, and who is also on Black in Neuro. “He’s doing or has done all the things I’m aspiring to. He’s a living, breathing example of the dream.”

Penn alumnus Gregory Carr, MD, PhD, an investigator in the Lieber Institute and an assistant professor in the Johns Hopkins University School of Medicine Department of Pharmacology and Molecular Sciences, understands the value of mentors who can act as models.

Carr earned a PhD in neuroscience in 2009 from Penn. He said he was fortunate to find a Black mentor early in his academic career. Carr’s undergraduate mentor Hewlet McFarlane, PhD, a professor of Neuroscience at Kenyon College, helped him navigate a course that can often lack a lodestar.

“Dr. McFarlane very early on took a lot of time to explain what it meant to be one of the only Black people in the field, and being aware of that early on was important, so I wasn’t surprised by it later,” he said. “It can be isolating, and you deal with imposter syndrome when you look around and you’re the only person who’s Black, and you think, ‘why am I the only one here?’. Now I recognize the problem isn’t me.” 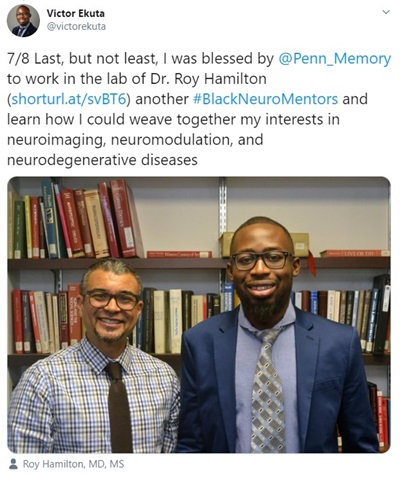 Training programs allow undergrads and graduate students to make connections with other Black neurologists like Victor Ekuta made with PMC’s Minority Scholars in Aging Research Program.

The statistics showing the underrepresentation of Black people in neuroscience and the testimony of so many Black members of the field, point to why the work Black in Neuro is doing — building the community and providing the directory — is so important. And it can not only help this small community to forge internal connections, but also to grow.

Hamilton stumbled upon the directory looking for ways to find diverse trainees to join the center he recently founded and now directs, the Penn Brain Science, Translation, Innovation, and Modulation Center, or BrainSTIM.

“The story of how I found Black in Neuro illustrates the necessity of its function,” he said. “You need places where those of us who are interested in increasing the recruitment and retention of Black and underrepresented minorities can go, so that there’s no excuse for an absence of diversity in one’s talent search. All too often institutions and programs throw their arms up in the air. ‘We put our advertisements in different places and it’s just so hard to find candidates,’ or, ‘You know, we did what we could, right?’”

Carr echoed that sentiment. “A lot of what you hear from programs and scientists is that they espouse a desire for increased diversity, but say, ‘we just can’t find the candidates or trainees.’ But what they’re really saying is, ‘I can’t find anybody in my network.’”

“It takes a little bit of effort to diversify an organization,” he said. “But it is always worth it in terms of equity, and also in terms of diverse lines of thought, perspective and inquiry your team will bring to bear to solve problems and make discoveries.”