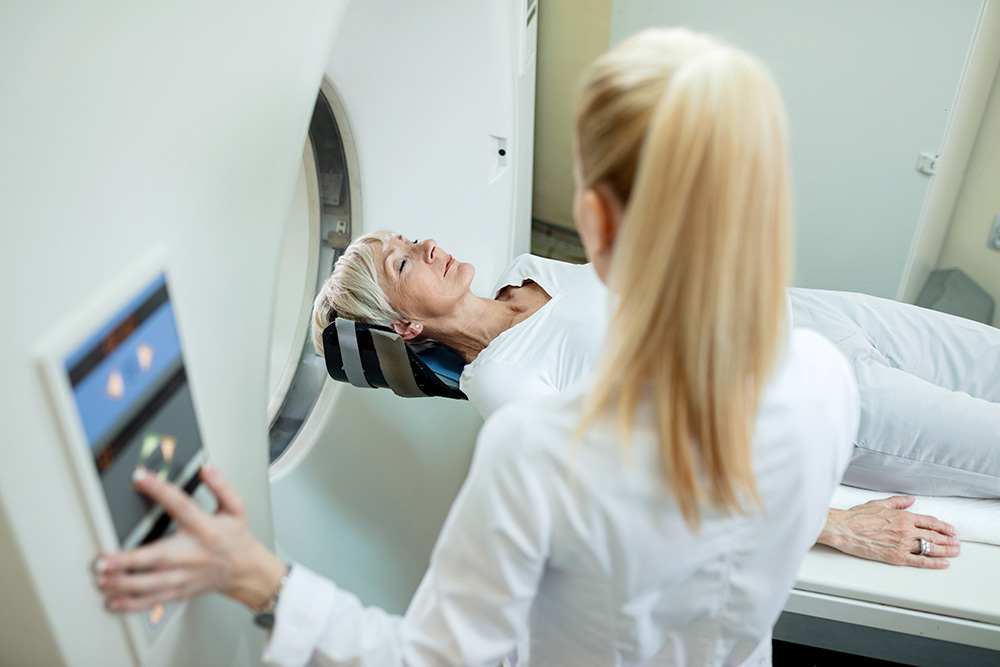 A young man suffers a horrific car accident one night in 1999. “Mr. R” is kept in a hospital bed for more than a month while doctors deliberate on his condition. He does not respond to commands nor any tests to stimulate his senses. He’s released back into the care of his parents and spends the next 12 years in a “vegetative” state, visited by a revolving door of neurologists. He has sleep/wake cycles, but doctors can’t find any evidence he’s aware of the world around him.

But in a 2012 study at the University of Western Ontario, Mr. R is put into a neuroimaging scanner and asked to think of either playing tennis or visiting the rooms of his home for 30 seconds at a time. Remarkably, his scan lights up. A man once thought to be completely unaware is responding to commands, not physically, but with his mind.

Mr. R highlights the importance of using brain scans to find consciousness in brain-injured patients, the subject of a paper published in Bioethics by Andrew Peterson, PhD; Adrian M. Owen, PhD; and Penn Memory Center Co-Director Jason Karlawish, MD. The paper analyzes the benefits and harms of using neuroimaging to assess brain-injured patients as our understanding of consciousness evolves.

The analysis comes after an update in 2018 to the U.S. practice guidelines on Disorders of Consciousness (DoC), a set of disorders that limit or inhibit a patient’s ability to understand and react to their environment. The update recommends greater standardized procedures to test patients and guides how clinicians should counsel families depending on a patient’s possible outcomes.

Questions of consciousness may seem to be the realm of highbrow, philosophical discussions, wrapped in tweed and references to Descartes, but they also are at the forefront of neurologists’ minds when diagnosing patients such as Mr. R.

In the study with Mr. R, Dr. Owen’s lab at the University of Western Ontario was trying to develop tools to answer, “how do you know that anyone is conscious after brain injury?”

Dr. Peterson, who was working with Dr. Owen at the time, is a philosopher by trade. The overlapping questions of consciousness had his interest piqued.

“Once you start asking that kind of question…there’s all sorts of ethical problems that start to pop out,” he said.

Through the Greenwall Faculty Scholars program, Dr. Peterson said he found a mentor in Dr. Karlawish, focusing his concentrations on how to prepare clinical physicians to face medical and ethical questions that are still in research.

“He’s been pushing me to think about the parallels between preclinical neuroimaging you see in regard to dementia or Alzheimer’s disease and applying neuroimaging techniques to brain-injured patients,” Dr. Peterson said. “What happens when we reveal these fancy neuroimaging results to families?”

Dr. Peterson and co-authors call for the use of standardized clinical practices in diagnosing patients with disorders of consciousness. When examined by a consensus of doctors — an unstandardized, nonclinical practice — patients are often misdiagnosed or their ability to respond to questions is shortchanged.

An extensive study released in 2009 found that 41 percent of brain-injured patients are misclassified by non-clinical methods, and in a 2016 analysis of six separate studies, 42 out of 294 patients were found to be able to control brain activity — just like Mr. R — even though they appeared unresponsive to other tests, or what Dr. Peterson calls “covert consciousness.”

“Even with the best neurologists, with the best tools, those patients would appear to be vegetative,” he said. With the practice of using neuroimaging in unresponsive patients, doctors can see inside the minds of these patients and more accurately determine their level of consciousness.

Beyond diagnosis, the moral questions extend to the care of a patient with DoC. Is it worth the cost of care considering the life that the patient will be leading? How will families react to the news of their loved ones’ diagnosis, and will it bring them false hope?

The authors do not claim to be able to resolve these thorny issues of hope and quality of life, but other research may be able to predict what effect these ethical questions may have.

There are no current studies about disclosure of neuroimaging results to families of DoC patients, but other research suggests that it may not even matter. Ninety percent of family caregivers of DoC patients still thought their loved one was conscious even after being informed that the patient was in a vegetative state. If not framed properly, the introduction of new information, Dr. Peterson said, may have little effect on swaying families one way or another.

Disclosure suggestions laid out in the paper were pulled from Penn Memory Center’s own work with investigative imaging and amyloid level results, specifically a study on disclosing results to cognitively normal adult participants.

Quality of life and appropriate end-of-life treatment are difficult to discern in patients with limited communication, while their families are in an emotionally vulnerable position and can carry beliefs and conceptions of varying degrees of accuracy. This poses a challenge for doctors: how best to disclose neuroimaging results to patients and their loved ones.

The authors argue that neuroimaging results could allow families to best evaluate the patient’s values and beliefs, as well as help clinicians, who in jurisdictions like the United Kingdom have more decision-making authority, personalize treatment to the patient.

“Families are likely to make decisions that best reflect patient values only if all clinical information is made available to them,” they wrote. A goal of using neuroimaging methods is to empower families and “place [them] at the center of the decision‐making process.”

In Their Words: ABC participant reflects on study experience during COVID-19